Blame the Worker or Fix the Safety Hazard? 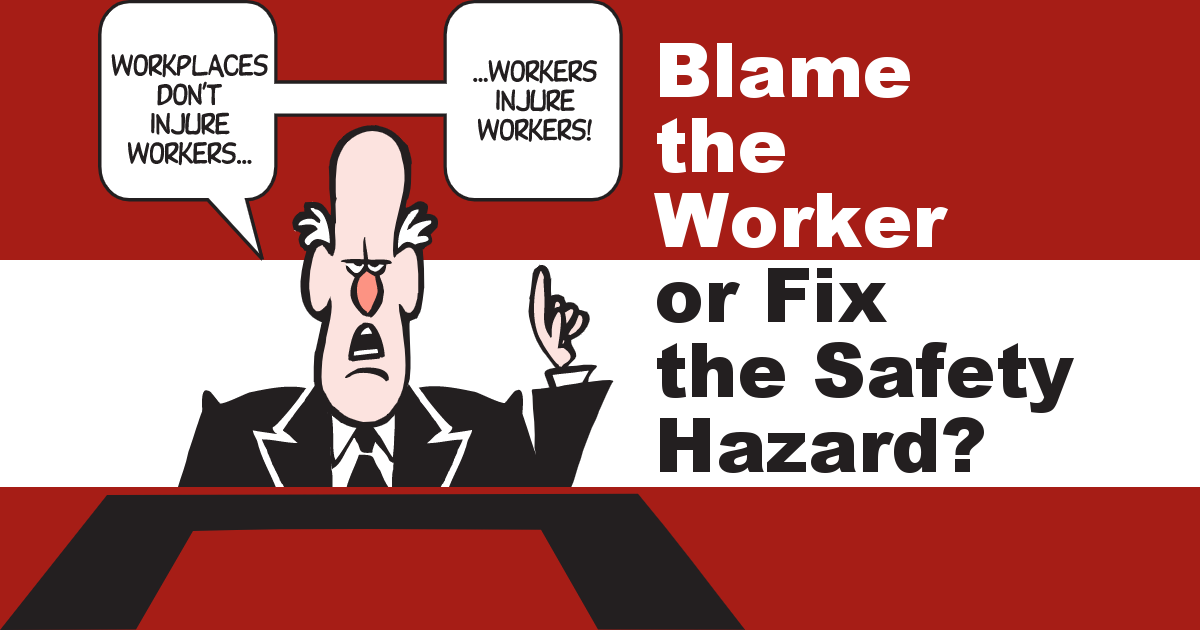 Rather than working to create a safe and healthy workplace, many employers would rather blame workers for accidents and injuries. Their tactics include “behavior modification” schemes and pitting workers against workers. Here's what's (very) wrong with that thinking — and what the union should be doing to protect our members ...

Cebulon Corporation institutes a new program to get employees to wear hearing protection. The company each week starts with a prize of $1000. Every time an employee is caught not wearing their ear protector, $100 is subtracted from the prize pool. At the end of the week there is a drawing and an employee wins what is in the pool. The names of the employees caught without hearing protection are posted. A few workers grumble that they thought the company was supposed to fix the noisy machines, not make everyone wear big, hot, ear protectors.

This is a common incident that occurs when employers base their safety programs on what is called “safety behavior modification.” Simply put, the idea is: can a person's behavior be changed through a system of rewards and punishments?

This is not new.

In a program like Cebulon’s, instead of punishing the workers for safety violations, the boss tries to get the other employees to punish the “offender.” Before going into that in detail, let's back up a bit.

The following chart is often referred to as the “hierarchy of controls” for avoiding workplace injuries and illnesses:

Behavior-based safety programs turn these controls upside down, directing attention to workers themselves as the problem rather than hazardous job conditions.

Who is at Fault for Accidents?

Most people who push safety behavior modification answer in a loud voice, “It’s the Worker.” In the 1930’s an insurance investigator named H.W. Heinrich did a study of the causes of workplace accidents. His conclusion was that 88 percent of all workplace accidents and injuries were caused by “workers’ unsafe acts.” He arrived at this conclusion by studying thousands of accident reports. The problem was that all these reports were written by supervisors. Of course they blamed the worker. How many supervisors in 2022 let alone in 1935 would blame the accident on faulty equipment? Not if they want to keep their job. These studies by Heinrich are still the basis for behavior-based safety programs.

Before the passage of the Occupational Safety and Health Act (OSHA), when you were hired for a job, the safety hazards were pointed out:

It was the worker’s job to work in unsafe conditions and too bad if they got hurt.

When OSHA was passed, after much organizing by the labor movement, the rules of the game changed. Employers were told that it was their obligation under the law to provide a safe workplace. They had to fix unsafe working conditions, not just tell workers to be careful. This was an acknowledgment of the fact that the overwhelming cause of accidents and injuries are unsafe working conditions.

Here’s a quick example: A worker has to lift boxes that weigh 50 pounds 20-30 times a day. Most of the time the worker follows the rules and “lifts with her legs” not her back. But every so often she just bends over and lifts. After several years on the job her back is giving her problems. What to do? The behavior modification approach would be to give her more training on how to lift and then discipline her for lifting wrong.

The OSHA method would decide that if heavy lifting is a continuous part of the job and even the best trained employee will suffer back strain eventually, then the smart thing to do would be to eliminate the lifting. Put in a hoist or lift or re-engineer the job so the lifting isn’t necessary. Teach the worker how to work safe BUT fix the problem.

Getting Workers to Punish Other Workers

Many safety behavior modification programs rely on gimmicks and prizes. “Safety Bingo” is one of the most common.

Safety Bingo works like this: Every worker is given a bingo card. A prize is announced, money, a large TV or something else. Every day if there are no accidents a bingo number is drawn and workers mark their card. If an accident occurs then the game has to start all over again.

What happens with safety bingo? Workers get mad at the worker who reports an accident because it hurts their chances to win “bingo.” Workers put pressure on other workers NOT to report accidents. The boss isn’t the bad guy, the other workers are.

All employers have to keep logs that list every accident or injury. This is required by OSHA, and if the logs show too many accidents and injuries then OSHA may come in and inspect the worksite. These log books are called OSHA 300 logs.

If an injury is not reported as a workplace injury the boss’s obligations to the worker under the workers compensation laws don’t exist. If the injury causes problems in the future, the company has no long-term obligation to the worker, especially if that person no longer works for the company.

Is the Union Opposed to All Programs That Reward Workers For Safety?

The union can be in favor of programs that give rewards for pointing out unsafe working conditions or suggesting ways to eliminate accidents and injuries. Not surprisingly, very few of these programs exist.

Can the Employer Institute These Programs?

Health and safety is a mandatory subject of bargaining. This means if the employer wishes to start any sort of health and safety program that affects the wages, hours or working conditions of union members, they must bargain with the union.

There are other issues too. In some cases these “behavioral-based safety programs” may violate both OSHA and workers compensation laws.

OSHA and most state workers compensation laws state that a worker cannot be punished or discriminated against for reporting an accident or injury. Programs that punish a worker for getting hurt by taking them out of the drawing for a prize may violate these laws. Contests that make public the names of workers who get hurt and therefore stop other workers from getting prizes can be deemed illegal because they subject the injured worker to discrimination from other workers.

Programs that encourage workers not to report accidents or injuries (safety bingo) may also violate the law. OSHA mandates that every accident or injury MUST be reported and entered on the OSHA 300 log (or whatever is currently mandated to record accidents and injuries).