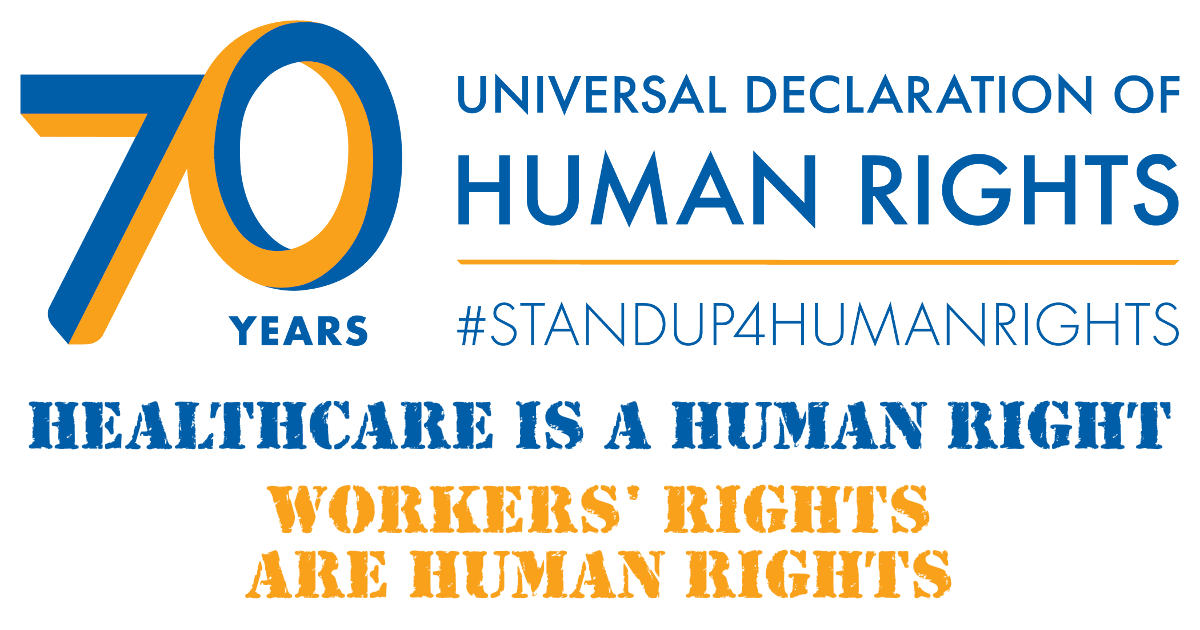 Seventy years ago, on December 10, the General Assembly of the new United Nations adopted the Universal Declaration of Human Rights. The 58 member countries committed to respecting a wide range of civil, political and economic rights as human rights, rights that all people have simply by virtue of being human. December 10, International Human Rights Day, commemorates the adoption of this document.

Eleanor Roosevelt, widow of President Franklin Delano Roosevelt, chaired the UN committee that drafted the declaration. Codifying a universal commitment to human rights resonated widely in the years after World War II, a war fought against Nazism and fascism. Roosevelt declared in his 1942 State of the Union address that “we of the United Nations are not making all this sacrifice of human effort and human lives to return to the kind of world we had after the last world war. We are fighting today for security, for progress, and for peace, not only for ourselves but for all men, not only for one generation but for all generations.”

Human rights had also been a rallying cry for struggles at home. Eleanor Fowler, Secretary-Treasurer of the CIO Women’s Auxiliaries, used human rights to connect racial and gender discrimination and argue that “Women Have Stake in Fight for Permanent FEPC [Fair Employment Practices Committee] Law” in an article printed in the UE NEWS on July 21, 1945. In the forward to a CIO Legal Rights pamphlet put out in response to police brutality against strikers from UE and other unions in 1946, CIO President Philip Murray declared that “The recent strike movement in this country has made labor sharply aware that the struggle for human rights and for popular liberty is a never-ending struggle.”

In the 1940s, it was widely accepted that true freedom requires economic security. President Roosevelt described U.S. goals in fighting World War II as protecting “Four Freedoms” — freedom of speech and religion, and also freedom from fear and freedom from want. In 1944, he proposed an “economic bill of rights” in order to “assure us equality in the pursuit of happiness.” These included the right to a job, as well as rights to housing, medical care, education.

The human right to health is, if anything, even less respected in our country. According to a summary of recent research put out by National Nurses United, “Roughly 30 million Americans are uninsured, and an additional 41 million adults are underinsured. In a recent poll, 20 percent of insured Americans reported having trouble paying their medical bills. … [and] [t]he United States has the highest number of preventable deaths under the age of 75, when compared to 18 other industrialized countries.”

Fighting for Our Human Rights

In 2003, UE members across the country joined “Workers Rights are Human Rights” mobilizations called by the AFL-CIO on December 10 to draw attention to the denial of collective bargaining rights in the U.S. In North Carolina, UE Local 150 launched the International Worker Justice Campaign in 2004 to draw international attention to how North Carolina's General Statute 95-98, which prohibits collective bargaining in the public sector, violates international labor and human rights standards.

In November of 2005, the campaign brought a panel of international jurists to North Carolina to examine the effects of the denial of collective bargaining on workers. The UE NEWS reported:

Following the hearing, UE and our international allies filed a formal complaint with the International Labor Organization in December. In 2007, the ILO (a UN agency) ruled against the state of North Carolina. “This ruling adds tremendous weight to the push for collective bargaining rights for all North Carolina workers,” said UE Local 150 President Angaza Laughinghouse. Local 150

Inspired by the IWJC, the Vermont Workers' Center launched a statewide Healthcare Is a Human Right campaign in 2008. Mobilizing working people throughout the state, the campaign was successful in passing enabling legislation in 2011 for what would have been the country's first state single-payer healthcare system. Unfortunately the corporate Democrat Governor Peter Shumlin, who had campaigned on single-payer in 2010, pulled the plug on the process in late 2014. UE locals have been among the strongest supporters of the campaign in Vermont, and UE members were among those who protested Shumlin's betrayal with an act of civil disobedience in the state legislature in January, 2015.

On this International Human Rights Day, UE is urging UE members, friend and allies to rally under the banner of “Healthcare Is a Human Right” and make calls to Congress in support of Medicare for All single-payer healthcare. General President Peter Knowlton wrote in a letter to locals, “Since 2003, when the first legislation for single-payer Medicare for All was introduced in Congress, UE has supported healthcare as a basic human right and we continue to support this critical piece of legislation that would provide real and necessary financial and healthcare relief for U.S. workers, union members, and residents.”