The federal holiday honoring Dr. Martin Luther King, Jr. that our nation is celebrating today honors the struggle for civil rights led by Dr. King during his lifetime. Less well-known is that its existence as a federal holiday, and as a holiday in many UE union contracts, was itself a product of struggle, one that began shortly after Dr. King was assassinated while supporting striking municipal workers in Memphis.

Four days after the assassination, Rep. John Conyers (D-Michigan) introduced a bill to create a federal holiday honoring Dr. King, but it would take fifteen years to become law at the federal level.

At the time of his death, King was far from widely admired. His insistence on opposing the war in Vietnam, challenging informal segregation in the cities of the North as well as legal segregation in the South, and demanding economic justice for the working class and poor of all races had alienated many of his earlier supporters.

Throughout the ensuing decade and a half, civil rights organizations, unions (including UE), and members of the Congressional Black Caucus collected millions of signatures in support of the holiday. King’s widow, Coretta Scott King, traversed the country campaigning for the holiday, and musician icon Stevie Wonder lent his talents, recording the song “Happy Birthday” about the campaign in 1980.

As the UE NEWS reported in a round-up of the activities of the 98th Congress, “With enormous pressure from unions and civil rights groups forcing action, Congress approved a new federal holiday honoring Rev. Martin Luther King, Jr. The same pressure made President Reagan sign the bill in spite of earlier statements against it.” The King holiday bill was signed into law in late 1983, and Martin Luther King, Jr. day was first celebrated as a federal holiday in January of 1986.

UE locals were also demanding recognition of Dr. King in the form of paid holidays in their union contracts. Flip through issues of the UE NEWS from the early 1980s (all helpfully digitized by the UE Archives at the University of Pittsburgh), and most issues contain a report of another local winning the King holiday. 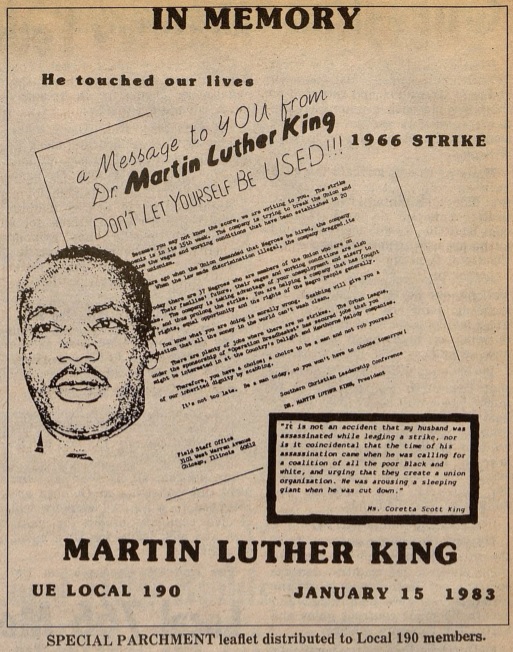 The victory was especially sweet for Local 190 at Kerr Glass in Chicago, whose members first enjoyed the paid holiday in January of 1983. The UE NEWS reported “Local 190 leadership alerted the membership to the special significance of the new holiday in the shop paper, Metal Scraps, at the Jan. 9 membership meeting, and with distribution of a parchment reproduction of a leaflet King had written in support of UE members on strike in 1966.” The leaflet issued by King, who was at the time organizing the Chicago Freedom Movement to “eradicate a vicious system which seeks to further colonize thousands of Negroes within a slum environment,” helped Local 190 win their strike. Following the strike, the union successfully pressured the company to hire more Black workers.

The struggle for the King holiday was also pivotal for workers at the Cummins Rocky Mount Engine Plant in Whitakers, North Carolina. Their pre-majority union, the Carolina Automobile, Aerospace and Machine Workers Union (now part of UE Local 150) was launched when workers circulated a petition in January of 1990 demanding a paid holiday to honor Dr. King — a demand they won the following August.

Other corporations were less forthcoming. General Electric, with whom UE had a national contract until the Erie locomotive works was sold to Wabtec in early 2019, resisted granting the King holiday until 1997. Locals 506 and 618, which represent workers at the Erie plant, have regularly participated in an annual march honoring Dr. King. In January 2001, the Local 506 UNION NEWS reported that “With the holiday, many members have taken advantage of their day off by marching and or attending special lectures and religious ceremonies that celebrate Martin Luther King’s life and the broader fight by many to secure civil rights for all Americans.” 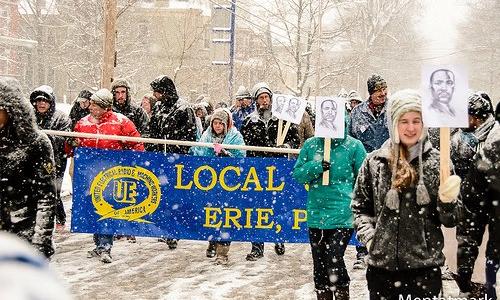 Although the pandemic has made it unsafe for people to gather in large groups this year, UE members continue to honor Dr. King’s life and struggle in creative ways. Today, CAAMWU/UE Local 150 members in Whitakers, in conjunction with the Bloomer Hill Community Association, are holding their 31st annual celebration of Dr. King’s life as a parking lot event following a community motorcade.

UE members also honor Dr. King’s unfinished work by continuing to struggle for justice, in both the workplace and in society. Municipal workers in North Carolina and Virginia continue the legacy of his final campaign, supporting striking sanitation workers in Memphis, by organizing with UE and demanding collective bargaining rights.

Following the first federal celebration of the King holiday in 1986, the UE NEWS published an article with a title that would be equally applicable today: “As Inequality Grows — Dream of Martin Luther King Not Yet Realized.” The conclusion of the article read:

Dr. Martin Luther King Jr. — murdered while in Memphis, Tenn. aiding striking sanitation workers — gave us an example to follow, and a goal to reach, when he challenged Americans to be “dissatisfied until every man can have food and material necessities for his body, culture and education for his mind, freedom and human dignity for his spirit.”