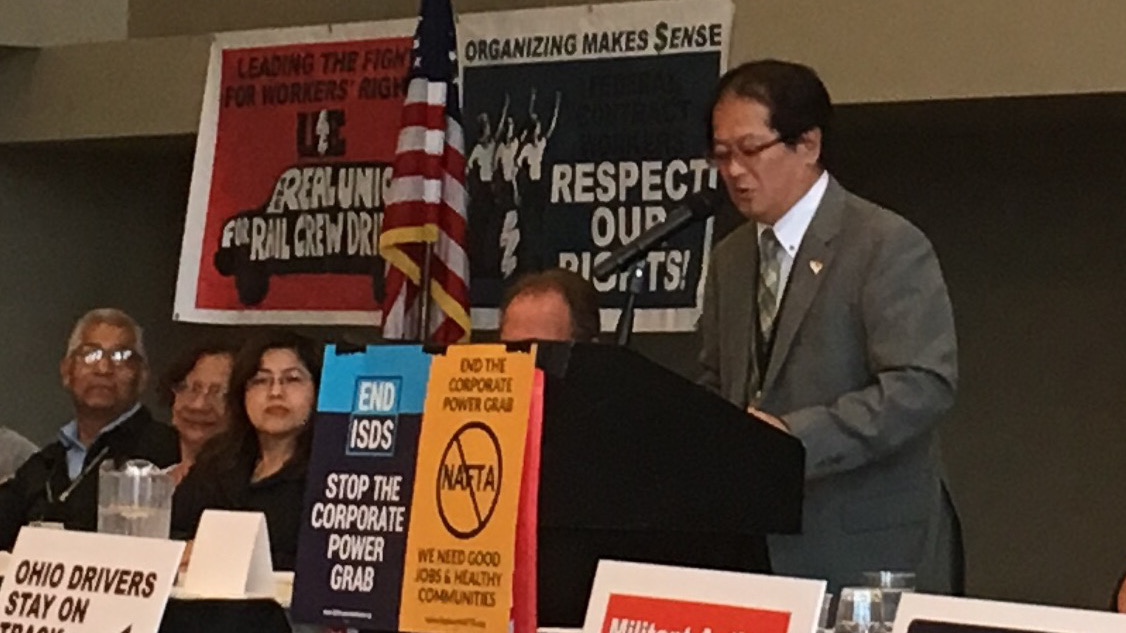 After a day filled with workshops, UE delegates reconvened Tuesday afternoon to discuss the solidarity pact with Unifor.

Members of the union’s General Executive Board who attended Unifor’s Canadian Council meeting last week spoke about their first-hand experiences with Unifor as being a rank-and-file union like UE. “If you closed your eyes,” said Scott Slawson, Eastern Region and Local 506, “you would believe that you were sitting in a UE convention.” He noted that there is definitely a need for cross-border cooperation, and that GE workers not only need to be organizing together, but also need to be bargaining together.

Jim Borowski, Eastern Region and Local 106, spoke about how UE has much to learn from Unifor, specifically citing the anti-harassment statement and policy with which they opened their convention. He then read a number of facts about the North American Free Trade Agreement (NAFTA) from Unifor President Jerry Dias’s recent Op-Ed in the New York Times, and observed that “the working class of this world needs to lock arms, spirits, voices and resources to combat and fight the gross inequalities that we witness throughout our societies.”

Elizabeth Jesdale, Northeast Region and Local 255, said that UE is “a rare and precious jewel that is in our custody. We still exist because of our principles, which ring true because they are right and just.” “Our dreams and visions and the same, and we all strive for a better life.” Charlene Winchell, Western Region and Local 1121, noted that there are “a lot of strong women in Unifor.”

UE International Affairs Director Kari Thompson gave the international report. She opened by following the practice of UE’s Canadian allies, taking a moment to acknowledge the indigenous people on whose land the convention was meeting: the Seneca, the Lenape, and others.

“The geographic borders that divide our countries on a map are no different than other categorizations that employers seek to exploit,” Thompson declared. “We must continue to improve the working conditions of all people regardless of where they reside, and our international solidarity collaborations are an important tool for our struggle.”

Thompson reported that on Friday, UE learned from the General Confederation of Labor (CGT) in France about a new round of labor law currently under consideration in France which would erode national labor standards and drastically change labor relations. While France avoided Marine Le Pen, their own version of Trump, in their last election, they got instead a version of Hillary Clinton: Emmanuel Macron who, like Clinton, is no friend to workers. Thompson asked delegates to save the date of September 12, when the CGT is calling for a day of action around the world against this law.

Thompson then turned to the renegotiation of NAFTA. She related that the negotiation representatives of Canada, Mexico, and the United States have entered a confidentiality agreement which prevents them from distributing texts, emails, proposals and presentations gathered from the other countries.

“Let’s think about that in the context of bargaining,” suggested Thompson. “When an employer tells us they want closed sessions of bargaining, is that good for us? No! Of course not. They want closed sessions because they’re afraid of our members seeing what they’re really offering—and it’s never good. We can assume the same is true here. Secrecy is bad for democracy in our unions, and it’s bad for democracy in our government.”

Thompson then spoke about Investor-State Dispute Settlement (ISDS), a process that allows corporations to bring lawsuits against governments for infringing on their so-called “right” to earn a profit. “We must demand that at the very least, any renegotiation of NAFTA must end ISDS,” said Thompson, and asked delegates to pick up postcards opposing ISDS, get them signed in the shop, and deliver them to their senators.

Dominique Daigneault, president of the Montreal Central Council of CSN, spoke about how the CSN and UE first met in Mexico at a political education training with the FAT. Daigneault described the militant resistance of the Quebec labor and social movements to their provincial government’s attempts to impose austerity measures, cutting social spending.

“We occupied the banks and financial businesses - this is where the money is, in the pockets of the rich companies.” She concluded with an appreciation of UE delegates: “The world needs more union activists and troublemakers like you.”

Daniele Calosi, FIOM’s National Representative responsible for General Electric, spoke about the global crisis of capitalism which is destroying the industrial base in North America and Europe and rolling back workers’ rights. The political system has not been able to reverse this phenomenon, and even parties based in the workers’ struggle have been unable to propose an alternative to globalization.

The attack on workers’ rights is accompanied by an attack on human rights, in the form of rising racist and fascist movements, in both Europe and North America. Unions need to fight this with a strong international solidarity to fight not only for better working conditions, but for better living conditions and sustainable development. This is the reason why FIOM and UE are working together to convene a meeting to establish an international network of GE workers.

Masamichi Watanabe, Deputy Secretary General of Zenroren, described Zenroren’s two major campaigns for the coming year: preventing militaristic revisions of Japan’s constitution, and winning provisions for “decent work.” Japan’s constitution, adopted after World War II, commits the nation to peace — but the current prime minister has announced his intention to revise it to allow the revival of a “war state.” Zenroren is expanding a new coalition of labor unions, citizens, and opposition parties to oppose the prime minister’s military bravado.

Zenroren is also struggling against attempts by the government to deregulate labor protections and undermine collective bargaining. Agreements between the government, employers and company unions are not only insufficient to prevent “Karoshi,” or death from overwork, but may actually increase it. Zenroren is organizing workers to join their struggle to instead win protections for “decent work” and an increase in the minimum wage.

Benedicto Martínez, one of the FAT’s National Coordinators and a long-time friend of the UE, spoke of the long and deep relationship between the two unions. In October the FAT will be celebrating their 57th anniversary. “Of the 57 years we have been going, 25 have been with the UE,” he said proudly.

Martínez spoke about effect of NAFTA on Mexico, as people from rural areas leave the land, some of them so desperate that they risk crossing the border into the U.S. to look for work. Violence has been increasing in Mexico, fueled by the so-called “war against drugs.”

“We are mobilizing against the renegotiation of NAFTA, because we don’t want another agreement that will leave us even poorer.” He noted that the Mexican government is trying to renegotiate NAFTA quickly, because they don’t want the negotiations to still be going when they face elections, next year.

Delegates then spoke on the resolution, “International Solidarity.”

Emma Paradis, Local 255, discussed the importance of the UE Research & Education Fund (a nonprofit which raises money to support the educational aspects of UE’s international work). She described how she traveled to Mexico with the UE Young Activists delegation this summer, and talked about the importance of rank-and-file exchanges in humanizing workers from other countries. “It is imperative that we unite across borders and fight transnational corporations with transnational solidarity,” she declared.

Scott Slawson, Eastern Region and Local 506, thanked guests from the FIOM for coming to the convention. Our problems are not just in the U.S., he said, we share them with workers worldwide. Companies use terms like globalization, but it’s just a way to whipsaw one nation against another. He suggested that it’s “time we create one world revolution, time to take our world back. When we go into bargaining with GE maybe we create a shirt with all of our international logos on it,” like the US-based Coordinated Bargaining Committee of GE unions used to do.

Armando Robles, Local 1110, talked about how his local’s take-over of their company was inspired in part by international solidarity. He first heard about worker co-ops when he was visiting Venezuela in 2006 - a member of an electrical worker coop approached him and described how “We are our own bosses.”

Nathanette Mayo, Local 150, described how she learned about participatory budgeting at World Social Forum in Brazil, and did a presentation for the Durham city government when she returned. This has resulted in positive change in the city, where people are beginning to control how the budget dollars are spent in their own communities.

More pictures are available on the UE Facebook page