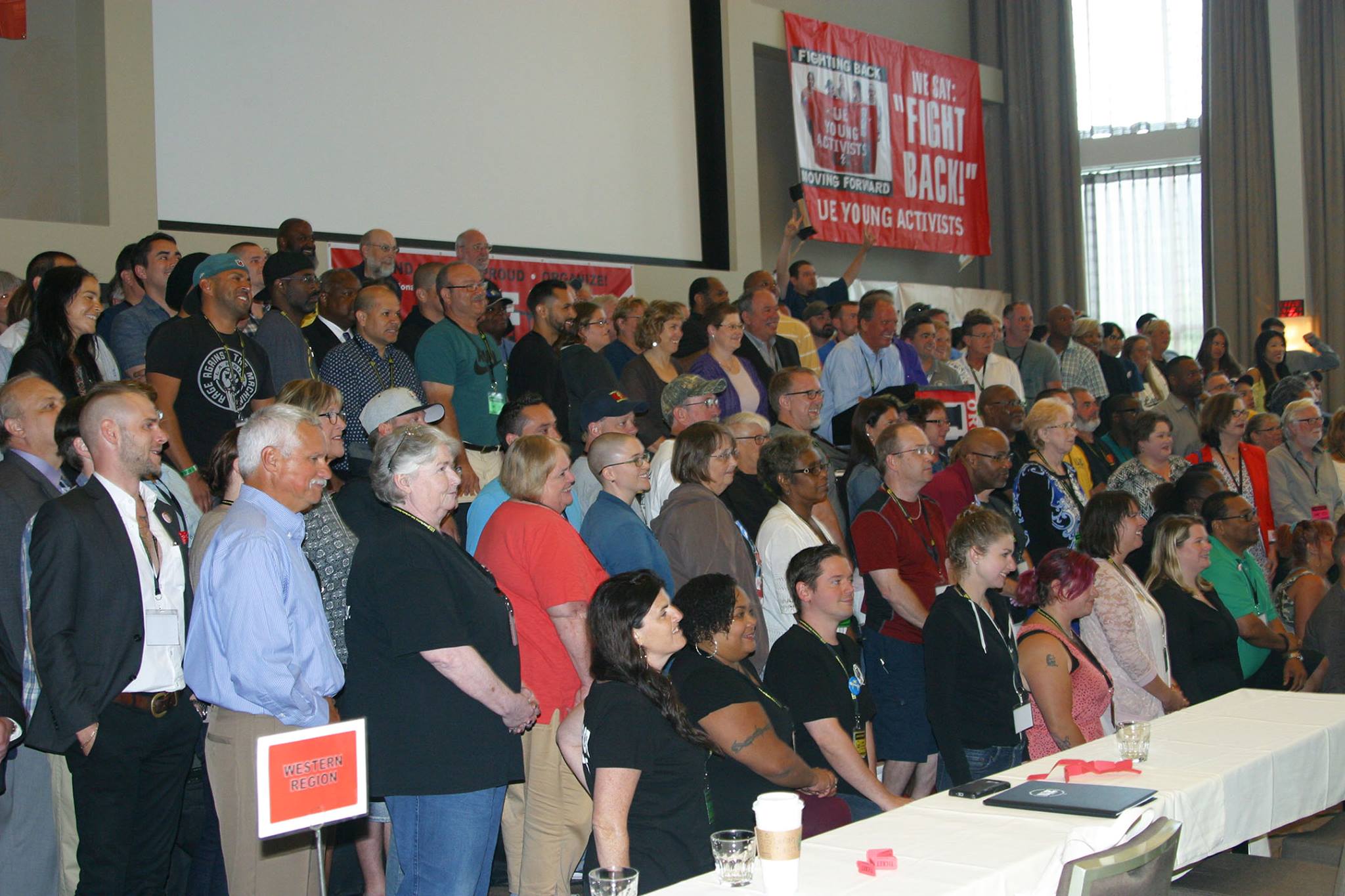 The UE 75th National Convention opened today with General President Peter Knowlton leading the delegates in the chant “Who Are We? UE!!!”

President Knowlton next recognized retired UE News Editor Peter Gilmore, who in retirement has been working with the Pennsylvania Interfaith Impact Network to address issues of livable wages, equity, and mass incarceration in Pennsylvania. Brother Gilmore introduced the Rev. Buena Smith Dudley of the St. James AME Church in Pittsburgh, a leader in PIIN, who gave the Invocation.

Rev. Smith Dudley spoke of how the movement in Pittsburgh has taken to downtown streets to demand livable wages, the right to work without sexual harassment, and the right to organize for fast food workers, security workers, and workers at UPMC - the largest employer in the City of Pittsburgh.

She spoke about the need to insist on accountability and training of police forces to stop police harassment and brutality, and the need to end mass incarceration. Pennsylvania has the proportionately highest percentage of lifers, and is building prisons where other states are shutting them down.

In her prayer, Rev. Smith Dudley called upon UE delegates to recognize that “We are one in the struggle for justice for all, we stand united against tyranny and oppression.” Delegates gave her a standing ovation.

Anne Feeney, labor singer and longtime friend of UE, both inspired and entertained the Convention with songs about corporate personhood (“corporations cannot pass the belly button test”), universal healthcare (“rich folks live and poor folks die”), and speedup in healthcare (“we are nursing as fast as we can”). She ended with “The Internationale,” noting that the international labor anthem was originally written to honor American workers struggling for the eight-hour day, and yet is rarely sung in this country.

Secretary-Treasurer Andrew Dinkelaker and President Knowlton then read the convention call; announced that Emma Paradis, Local 255, and Matt McCracken, Local 506, would serve as sergeants-at-arms; went over the convention program and agenda; and recognized retired UE Director of Organization Bob Kingsley.

President Knowlton opened his President’s Address to the convention by asking all new delegates to stand and be recognized. He spoke about the rank and file character of UE’s founding convention in 1936, and how UE, more than most, understands the crucial link between trade unionism and the health and democracy of our society.

Knowlton reminded delegates to “remember how the hell are we accomplishing so much when we seem to have so little. UE has always punched above our weight class.” He asked delegates to think about “what we could accomplish in this country if the millions of unorganized workers were under our banner. Needless to say, Bernie Sanders would be the one sitting in the Oval Office instead of the racist reality-TV show we have now.”

He noted that UE’s ability to to organize massive numbers of workers rests with developing new forms of trade union organization that cross borders to the north, similar to UE’s relationship with the Frente Autentico del Trabajo in Mexico. He spoke about UE’s developing relationship with Unifor, Canada’s largest private sector union, which shares UE’s militant, rank-and-file philosophy and represents workers in every major economic sector in the Canada, including the public sector.

Knowlton then recognized the determination and militance of UE locals involved in tough struggles throughout the country, including Locals 506 and 618’s struggle to retain jobs and fight concessions at GE’s Erie, PA plant; Locals 893 and 896’s struggle to defeat the stripping of public-sector collective bargaining rights in Iowa; Local 150’s defense of dues deduction and fight against brutal working conditions in North Carolina; and Local 170’s campaign to preserve public hospitals in the state of West Virginia. He noted the crucial role of Our Revolution and Labor for Our Revolution in supporting Local 150’s successful campaign to retain dues deduction for public-sector workers who are denied any kind of collective bargaining.

He also spoke about recent contract negotiations at Aramark in La Crosse, Wisconsin, where Local 1121, faced with the impact of “right to work” legislation, united their members and won the best contract they ever have had through a militant campaign which culminated in a 45-minute walkout. He also spoke about how Local 274 members at Kennametal in Greenfield, Massachusetts who won their contract through shop floor actions, regular meetings with the members and community coalition building.

Knowlton remarked that, thanks to Bernie Sanders’ popularization of the ideas of democratic socialism, especially among the newest generation of workers, “there is a political realignment happening in our country, which is considering the dangerous thought that maybe, just maybe, instead of privatizing profit and socializing costs we should socialize profits and privatize costs. Oh, and along the way, stop blaming workers for making a decent wage and having benefits and a shortened workweek so we can spend time with our families and enjoy the fruits of our labor.”

Turning to our nation’s broken healthcare system, Knowlton noted that “I always thought that those johnnies you get at the hospital or doctor’s office are the perfect visual of our healthcare system. Looks ok from the front - but your butt is completely exposed from behind.” He spoke about how our healthcare system, based on profit, creates massive profits for a few while increasing rates, restricting provider networks and increasing co-pays and upfront deductibles. Fighting for universal, single-payer healthcare will be one of UE’s biggest campaigns and efforts in the next couple years.

Knowlton also spoke about the need to rid our nation and our national psyche of racism and white supremacy. Referring to recent struggles to remove Confederate statues, he noted that “there is a purpose to removing symbols of those who fought to support that system, just as after WWII the symbols of Nazism were forever banned from many countries in Europe. . . . We don’t need statues of our oppressors to remind us of our oppression.”

More broadly, Knowlton said, “we have to continually discuss and educate ourselves and our co-workers about this system we live in and why we need to change it because racism and all its manifestations is the biggest source of division among workers and in workplaces today. As long as we allow that division to exist it will be impossible for workers to unite and confront the boss and build a trade union movement worthy of our name.”

Knowlton also noted that the movement to address climate change needs to fight for a just transition that preserves good-paying jobs, noting that more jobs would be created with a just transition to renewable than all current fossil fuel jobs combined.

Knowlton concluded his remarks by noting that, while many have predicted UE’s demise, it is UE’s militant democratic rank and file philosophy, character, principles and policies that have allowed us to survive.

Secretary-Treasurer Dinkelaker then announced committee assignments, and delegates gathered for a convention photo. Following a lunch break, convention committees met through the afternoon, preparing resolutions, reports, and constitutional amendments to be considered by the full convention over the coming four days.