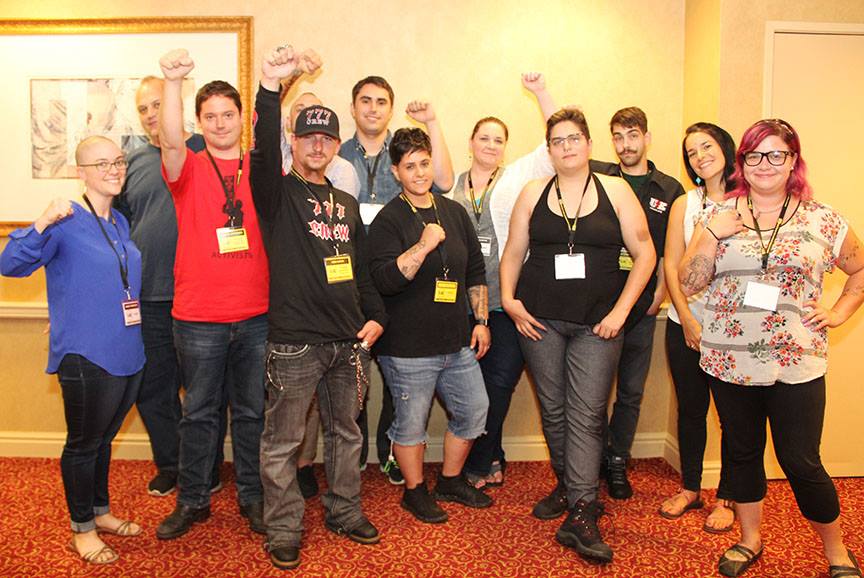 UE's 75th National Convention gets started Sunday morning, but some UE members have been in Pittsburgh since Thursday, getting ready for UE’s most inspirational, educational, democratic rank and file event.

UE Young Activists have been hard at work since 5:00 p.m. Thursday, learning about UE and labor history, participating in a workshop on effective strategies for winning fights against management, and assisting with UE organizing.

They took a walking/bus tour about the Great Railroad Strike of 1877 on its 140th anniversary, and visited the site of the battle between strikers and the Pennsylvania militia, near Downtown Pittsburgh. They also learned about the Russian Revolution and its impact on labor movements around the world, on its 100th anniversary.

Friday afternoon the UE Young Activists participated in a workshop, “Fighting Inside: How to Strategize to Win Fights against Management,” and today (Saturday) they are making phone calls to assist with UE organizing campaigns.

UE's General Executive Board also met on Thursday. They made final preparations for the convention, including work on several resolutions that will be presented to delegates from the GEB on topics of crucial importance for the union and the U.S. working class, including collective bargaining, independent political action, international solidarity and fighting racism.

Members of the GEB also recognized UE Trustee Karel Hoogenraad, Local 1139, who is retiring. President Peter Knowlton recognized Brother Hoogenraad’s role in mentoring many UE members and leaders, stretching back to the 1970s.