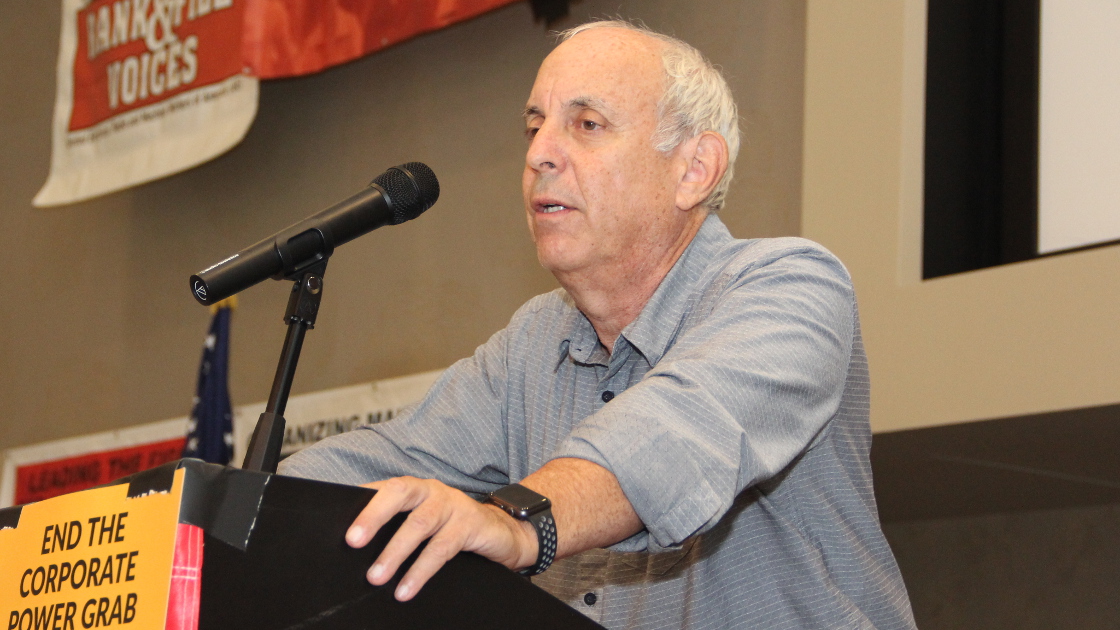 On Wednesday morning, delegates to UE's 75th National Convention discussed resolutions addressing the need to fight for equity for immigrants, women, and people of color, the scourge of workplace closings, and the need for the working class to engage in independent political action. They heard a video address from Senator Bernie Sanders (I-VT), and remarks from Larry Cohen, the board chair of Our Revolution.

Standing Up for Immigrants’ Rights

The session began with discussion of the resolution “Stand Up for the Rights of Immigrant Workers: Defeat Trump’s Agenda of Hate!” Speaking first on the resolution, Bill Ladd, Local 228, asked his fellow federal service center co-workers from Locals 208, 228, 808, 1008 and 1118 to stand. He said that service center workers came from so many different countries they were a veritable "Ellis Island," and spoke strongly against any attempts to demonize immigrant workers.

Armando Robles, Local 1110, spoke of his disappointment and anger that President Trump had pardoned Sheriff Joe Arpaio of Arizona, whose violation of the human rights of immigrants have made him an international symbol of hate. Marie Lausch, Northeast Region and Local 222, spoke approvingly of how police in her town had refused to enforce immigration laws.

Mike Roger, Local 120, told delegates how NGK-Locke gave the local a 60 day notice that they are going to close the plant, the shortest possible notice allowed under the law. The company’s first communication with the union after they announced the plant closing was to ask UE members to give up their contracts and allow temps in the plant.

Brother Roger described how Under Armour CEO Kevin Plank owns all the land around the plant, and wants to shut down NGK-Locke - one of the few shops in the city that still pays a decent wage - in order to build a playground for wealthy people in the inner harbor, with expensive condos and restaurants. Most galling is that Plank is asking for over $700 million in tax money to help him destroy jobs.

Even though the local has been given a “last date” of September 8th, they are keeping up the struggle. They held a “Wear Black Solidarity Day” with 100% participation, and and planning to hand out leaflets about their Unfair Labor Practice (ULP) charges against the company at opening day for the Ravens and at an upcoming City Council meeting. 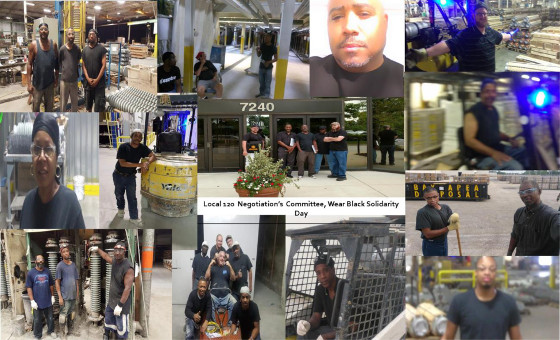 Leo Grzegorzewski, Local 506, described for delegates how Locals 506 and 618 received a transfer of work notice from General Electric in late July. 572 members of Local 506 and 80% of the membership of Local 618, may lose their jobs, which will affect them, their families, and their communities. Last year, GE destroyed almost 1400 jobs in Erie, and many of those affected are still looking for work. Still, declared Brother Grzegorzewski, “we’re going to fight and win.”

Ray Pompano, Northeast Region, reminded delegates how President Bill Clinton, after being elected with labor’s backing, passed the North American Free Trade Agreement (NAFTA). UE and other unions organized massive protests, because “we knew it would hurt workers in all three countries.” There is not “a dime’s bit of difference” between Democrats and Republicans when it comes to free trade and corporate greed.

Nola Lilly, Local 170, said that her local was notified this week that the people trying to sell off state hospitals - a plan that the local defeated last year - are in the workplaces again this week. She said that if the hospitals are sold off, not only will workers lose their jobs, but the residents will become homeless.

Delegates then discussed “The Battle to Preserve Women’s Rights.” Marie Lausch, Northeast Region and Local 222, and Elizabeth Jesdale, Northeast Region and Local 255, reported from the Women’s Caucus meeting held the previous night, and offered amendments to add language recognizing that UE women have been struggling and winning rights since the 1940s, to educate officers and staff as well as members, and to develop a harassment policy for regional council meetings and national conventions.

Amendments to the resolution were also offered by Liv Jordan, Local 203, to be more inclusive of those seeking reproductive justice; and Antwon Gibson, Local 610, to demand that Congress improve and expand the Family and Medical Leave Act.

Elizabeth Nikazmerad, Local 203, spoke about her experiences of being paid less than male workers doing the same job in a nonunion workplace, and also about the importance of UE’s fight to protect women’s healthcare choices in union-negotiated healthcare plans.

Nathanette Mayo, Local 150, described how her local won 12-week parental leave for city workers in Durham, and emphasized that it is the equal responsibility of men and women to take time off to raise children. “We have to change the minds of both men and women,” she said, an convince them that the whole family is responsible for raising children.

Also speaking on the resolution were Sharry Neidfeldt, Local 1161; Dawn Lynn Meyer, first-time delegate from Local 808; Becky Dawes, Western Region and Local 893; Armando Robles, Local 1110; Delores Phillips, Local 1118; Joni Anderson, Local 1107; Fred Harris, Local 601; Alina Barry, Local 716; Ricky Steele, Local 506; Bill Ladd, Local 228; and Dan Leary, Local 222; many of whom spoke about their own or family members’ experiences with sexual harassment, being inspired by women in their union and their families, and men’s responsibility to stand up for women’s rights.

The convention then considered the resolution “Fight Racism.” Donna Morgan, Eastern Region, described how her husband’s uncle, Lamar Smith was shot in front of the courthouse in Brook Haven, Mississippi while he was signing up people to vote during the Civil Rights movement. He lay there for four to five hours before he died. Sister Morgan declared that we need to “put an end to racism before it tears our country apart.”

Mike Ferrito, Local 506; Kelly Robtoy, Local 208; Alina Barry, Local 716; and Bailey Kelley, Local 896 all spoke about the importance of challenging racism even when it is uncomfortable. Brother Ferrito said “if you see racism and don’t address it, you are degrading your own self,” and Sister Barry spoke about how “passive racism” is just as destructive as active racism.

Jaime Valencia, Local 1077, described his experience of being racially profiled at a department store, being told that a fragrance was too expensive for him just because he was Latino. Nathanette Mayo, Local 150: spoke about the Freedom Manifesto (link to PDF), an effort endorsed by Local 150 to build a more united Black Liberation movement.

Several delegates spoke about actions they and their locals have taken to combat discrimination on the job and in their communities, including Elizabeth Nikazmerad, Local 203; Cliff Hall, Local 151; Lacey Harry, Local 808; and Sheila Thompson, Local 893, including a number of successful fights against bosses’ attempts to prevent UE members from speaking their own languages in the workplace.

Bill Ladd, Local 228, spoke about growing up in a racist household, and how the “love and family of being part of [UE] … strengthens my resolve every day to make sure everyone is treated equally and that no one is putting other people down.” He said that UE’s commitment to fighting racism and bringing workers together is “one of the most important things about this organization.”

Liv Jordan, Local 203, suggested that capitalism is really at the root of a lot of racism, because chattel slavery formed the base of our economic system, and recommend the book The New Jim Crow by Michelle Alexander and the documentary 13th by Ava DuVernay.

Ricky Steele, Local 506, told delegates “there is no racism gene, no hate gene. Racism is taught, it’s nurtured, and it grows. It is up to us as leaders in our workplace and communities, to nip it in the bud.” He suggested that locals consider establishing Unity Councils like the one created by Local 506.

Angaza Laughinghouse, Local 150, suggested that delegates take a close look at the strategic role of the South for our labor union.

In a short video address, Senator Bernie Sanders (I-VT) denounced the recent announcement by General Electric that they are planning to transfer close to 600 jobs from the Erie, PA plant represented by UE Local 506 to a low-wage, non-union plant in Texas. He said we need to stop the race to the bottom for wages and benefits and instead build an economy that works for everyone.

Crucial to building an economy that works for everyone is restoring the right to organize a union, increasing the minimum wage, and strengthening and improving Social Security by removing the cap that allows wealthy individuals to avoid paying their fair share into the system.

Senator Sanders also said that it is high time that the U.S. join every other industrialized nation in establishing a universal, single-payer Medicare-for-all healthcare system.

Following the video address from Sanders, delegates heard remarks from Larry Cohen. Cohen is the board chair of Our Revolution, the organization formed to continue the political goals of Sanders' presidential campaign, and former president of the Communication Workers of America (CWA).

Cohen opened by recalling the early history of the UE and the Congress of Industrial Organizations (CIO), when a million workers organized every year and transformed the country. He recognized the importance of UE’s brand of rank-and-file unionism, and shared how inspired he was seeing UE delegates discuss the resolutions on standing up for immigrant workers right, preserving women’s rights, and fighting racism.

He told delegates that he joined Bernie Sanders’ campaign because Sanders was running for president to build a mass movement, inside and outside of the Democratic Party, for working-class people. Our Revolution is a way to build political organization among the 13 million people who voted for Sanders and the 5 million people on Sanders’ email list.

Speaking about the diversity of the Our Revolution board, Cohen declared, “We’ve got to be Black, brown and white, women and men, straight and gay, or we’re not going to have a working class politics in this country.”

He stressed that Our Revolution is interested in winning, which is why they are mostly running candidates at the local level, in races that can actually be won.

He also spoke about how the U.S. lags far behind most other countries in protecting workers’ rights to organize. Bosses can threaten and coerce workers during union elections. “Do we expect people to have to be heroes to organize a union in their plant?”

But, he said, they can’t stop people from forming Our Revolution groups.