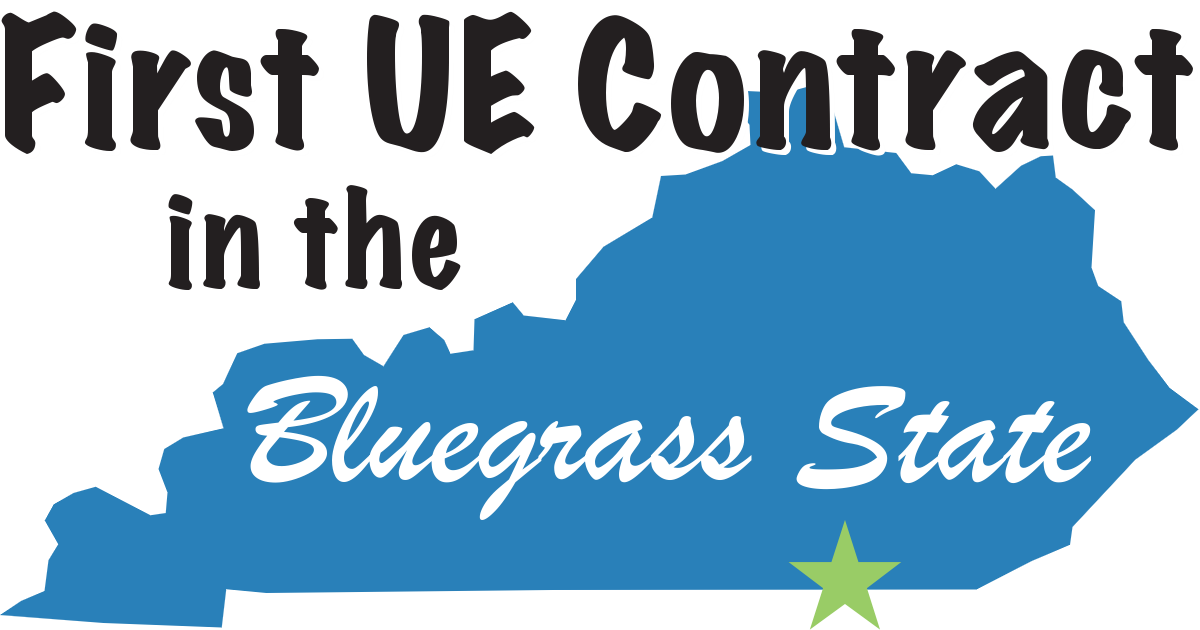 A one-day walkout, followed by a petition and a strike vote making it clear that workers were willing to take action again, brought home a solid first contract for new UE Local 728 at the Kentucky Consular Center at the end of November. Workers ratified the new agreement on December 5.

Workers will see immediate gains of between $2.12 and $3.08 per hour, representing a $1.30 increase in the health and welfare benefit and wage increases of between $0.82 and $1.78, depending on job classification. Wages will then increase by 3.5 percent and 2.75 percent in the second and third year, respectively, with the health and welfare benefit increasing by 20 cents each year. Cumulative raises over the course of the three-year contract will be in the double digits for everyone, with the lowest-paid workers seeing their take-home pay increasing by almost 25 percent.

“Some sort of power”

The committee’s “number one” priority, he said, was increasing pay for the General Clerk I jobs “to try to get them out of poverty levels.” General Clerk I jobs, the lowest-paid in the shop, had a wage rate of $11.54 before the union. When the contract went into effect on December 1, this was increased to $12.95 — a 12 percent raise — and by the end of the contract, they will see an almost 20 increase in their base wage, and an almost 25 percent increase when health and welfare benefits are figured in.

Management’s attitude made negotiations “frustrating,” said negotiating committee member Holly Shupe-Mahan, but “it gave us more insight into how the company really ticks. It was a good experience.”

“We are ready to do what it takes”

After almost two months of negotiations, and before any bargaining over economics had taken place, the company made a surprise announcement on October 29. Their contract date with the State Department had been adjusted to December 1, and therefore, in order to have an agreement that provided any kind of raises for the next year, it would have to be done by the end of October — within a couple of days. Furthermore, the company left the table and said they would not be able to meet again until December.

October 29 was a Thursday; UE members held an emergency Zoom meeting over the weekend and voted to hold a one-day walkout on Monday, November 2. “I think we really surprised a lot of people about how quickly we could organize,” said Hollingsworth.

After the job action, ”they immediately came back and started meeting with us.” The company agreed to a slew of bargaining dates in November and got the State Department to adjust their guidelines to fund the contract.

Although the company bargained almost every day during November, they remained intractable on a variety of small language issues. The week before Thanksgiving, over 200 workers signed an online petition telling the company “We gave you a second chance. Don’t blow it. We demand a fair contract and we demand it now. We need real raises and affordable benefits. We need a contract with strong seniority rights. We need a contract without quotas. Stop stalling and start bargaining. If you don’t give us what we need, we are ready to do what it takes to get it.”

The following week, some issues started coming off the table, but the company’s proposals on wages and benefits remained far apart from what KCC workers deserved. “Another day’s turnaround, and we had a 100 percent vote to give the negotiating committee the right to call for a strike or another job action,” said Hollingsworth.

The strike vote took place on Sunday, November 29. With the company fully aware of workers’ willingness to take action, a tentative agreement was reached after a marathon bargaining session the following day.

In addition to the wage and health and welfare increases, the shift differential will increase by 10 cents, bereavement leave will expand to cover more relations, and the years of service needed to earn a fourth week of vacation will be lowered from 15 to 10.

The contract obliges the company to meet with the union in advance of the renewal process for health and welfare benefit plans — something KCC workers had previously had no say over. Local 728 and their sister Local 228 will be conducting that bargaining with LRDM over the next several months.

Local 728 successfully resisted company attempts to impose a “performance standard” (e.g., production quotas) instead of seniority for layoffs, and won concessions on the company’s draconian attendance policy, which penalized workers for being even one minute late. The new policy will be substantially relaxed, and include just cause.

The contract makes significant improvements to the cell phone policy, recognizing that parents with children in school or daycare, children who provide eldercare for parents, or workers waiting to hear from their doctor, among others, need to be able to check their phones during work time. It also provides for a 20-minute union orientation for new hires.

Shupe-Mahan told the UE NEWS that before the contract, “Employees would dread going to work” because of management’s strictness. “After we got the contract ratified, there were quite a few people who told me, ‘I’m not going to feel like I’ve got a big burden on my shoulders,’” she said.