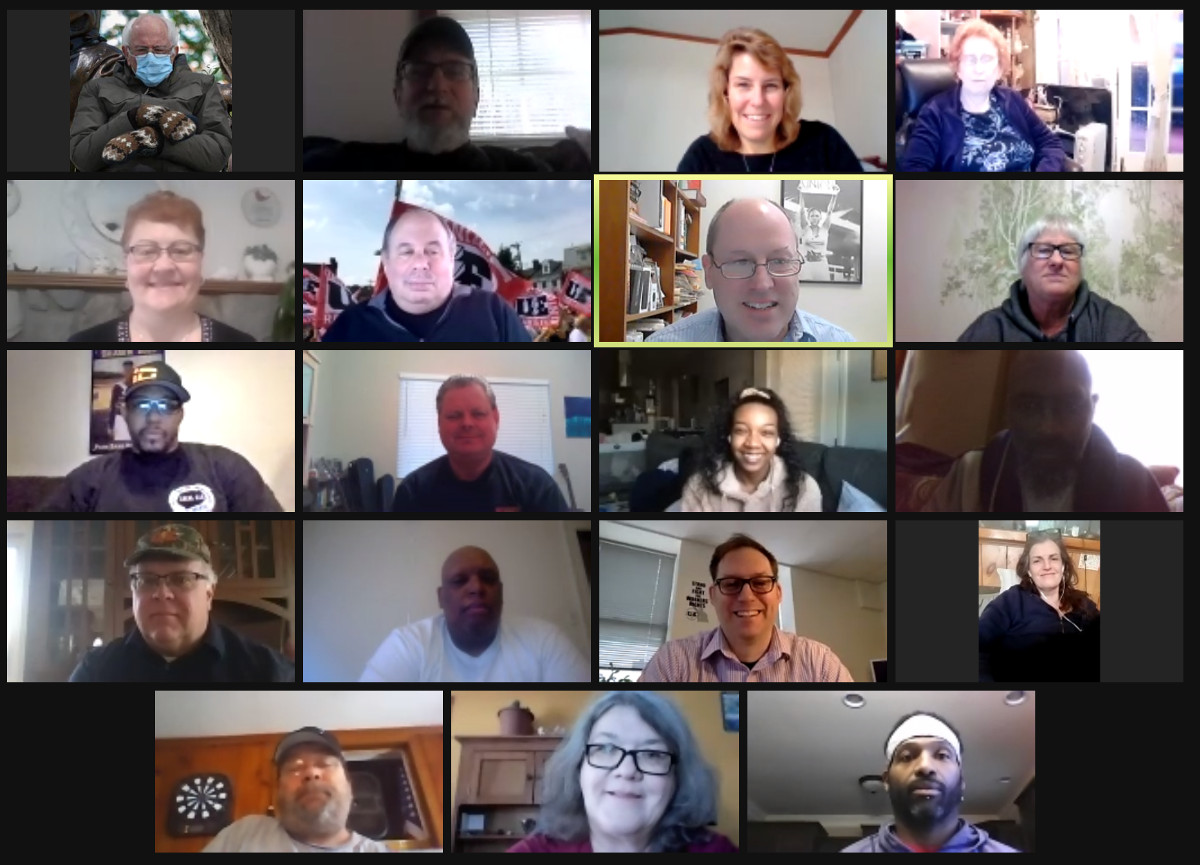 The UE General Executive Board meeting over Zoom. Local 506 President Scott Slawson (upper left) was having problems with his camera and opted to be represented by a popular meme.
March 3, 2021

“This has been a really busy period,” UE Director of Organizing Gene Elk told the General Executive Board during their January meeting. “We now have opportunities to organize hundreds of workers.” Elk gave an overview of several large campaigns the union is currently engaged in, among 1500 graduate workers at the University of New Mexico, 900 graduate workers at New Mexico State University, and 700 largely black city workers employed in the utilities, public works, and sanitation departments of the city of Virginia Beach.

He also reported on the solid first contract won by new UE Local 728 at the Kentucky Consular Center in Williamsburg, KY (see UE NEWS story), and on new efforts to boost UE membership in several locations where UE locals have a collective bargaining agreement with their employer, but are unable to collect fair-share fees from the workers they represent due to so-called “right-to-work” laws and the Supreme Court Janus decision extending “right to work” throughout the public sector.

On the legal front, Elk reported that in December the Trump labor board decided to review an NLRB election won by UE last summer in California at rail-crew contractor PTI, based on objections filed by the employer that had previously been dismissed out of hand by the regional NLRB director. While UE has a strong legal case, Trump appointees will maintain a majority on the NLRB until later this year, and could potentially use that majority to issue a decision in this case that would strictly limit unions’ ability to contact workers during mail ballot elections.

The union has also had to expend significant time and resources fighting defensive battles as well, Elk said. Due to the anti-union law passed by Republicans in Iowa in 2017, UE public-sector locals there have had to participate in (and pay for) the biennial “recertification elections” in which unions must win yes votes from an absolute majority of the bargaining unit. Local 893 President Becky Dawes, whose local represents over 2,000 Iowa social workers and state scientists, reported that the successful campaign to win the recertification elections was “a large task” and that, unfortunately, momentum from winning the recertification elections did not translate into a change in the legislature.

“A broad, positive set of policies to help working people”

General President Carl Rosen began the Political Action Report by opening a discussion on Trump’s efforts to stay in office after losing the November election. GEB members shared their experiences of how the political divisions in the country are playing out in UE workplaces. Local 506 President Scott Slawson reported that he addressed the January 6 insurrection at his local’s membership meeting. “I felt it was important to address this issue with the membership on all fronts,” he said. “I'm not one to walk away from things like this.” As a combat veteran, he said, he felt the insurrection “put American citizens at risk, and put the United States military and police at risk.”

The GEB adopted a statement, “Hold the Biden Administration Accountable to the People,” which declares that “our nation is at a crossroads” and that “the solution to the kind of divisions we have seen during the past four years is not suppression of civil liberties, but rather more democracy, in all aspects of our lives.” The statement identifies the emergence of “a movement behind a broad, positive set of policies to help working people” as an opportunity to win millions of good, union jobs through a Green New Deal, provide universal health care through Medicare for All, take concrete steps towards racial justice, fix our broken immigration system, and strengthen the labor movement by restoring workers’ right to organize.

President Rosen noted that the political situation is “very fluid” and that “Biden had given us a little better treatment than we might have expected so far,” but emphasized that working people will judge the Biden administration based on whether it meets their material needs. “Do workers see their incomes going up? Are there good jobs available?”

Slawson reported that Local 506 is exploring a campaign to bring jobs to Erie as part of the Green New Deal. The campaign will have a multi-pronged approach: regulating railroads to require that all locomotives meet much stricter emissions standards, encouraging high-speed rail to offset air travel, and setting a long-term goal of eventually electrifying rail. He noted that the campaign will take a lot of work, but if successful, “a lot of unemployed folks could be put back to work at good jobs at good wages.”

To prepare for this, Dinkelaker reported that UE will be talking to other North American Solidarity Project unions, such as National Nurses United, about their experiences with managing virtual conventions.

Dinkelaker also reported that the GEB Financial Task Force began meeting in December and reviewing materials. The task force will schedule meetings leading up to the June GEB meetings to develop recommendations to be incorporated into the next year’s budget.

In his financial report, Dinkelaker reported that “We’ve been holding our own, in spite of everything else that’s been going on around us.” He also led a discussion of efforts to promote more diversity in UE staff and leadership.

The board also heard reports on the North American Solidarity Project and the union’s educational and international work, and adopted a non-discrimination policy for staff not covered by the UE Staff Union contract.