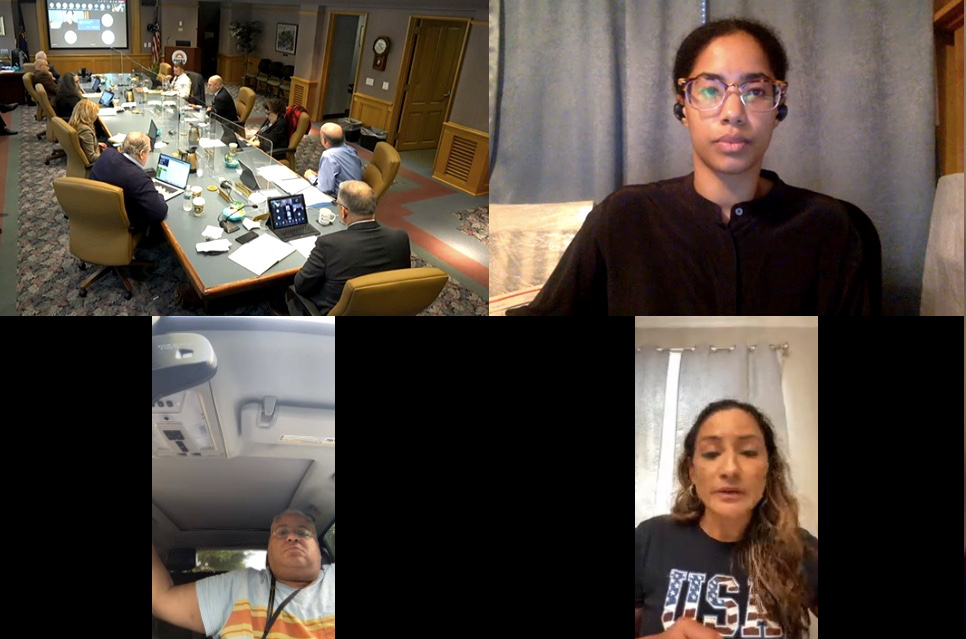 In June, 250 workers at the Refresco bottling plant voted to join UE in a National Labor Relations Board (NLRB) election, forming UE Local 115. However, rather than beginning negotiations for a first contract, Refresco has instead filed a series of frivolous legal appeals (which are complaints about the alleged misconduct of an NLRB agent and, incredibly, the behavior of its own company observer during the voting process). The NLRB ruled in UE’s favor in September, but the company filed a further appeal on October 8.

The new UE members are not simply waiting on the legal process. In late September, 20 workers marched on company managers, demanding that the company begin negotiations. They delivered a letter signed by a majority of their coworkers that called out Refresco’s lack of respect, and asserted that without workers having a real say over their working conditions, the “plant will remain in its current state of chaos.”

Workers are also taking their story to various public-employee pension funds which are invested in the company.

Refresco is partially owned by PAI Partners, a private equity firm based in Paris. As journalist Matthew Cunningham-Cook reported in an article about Local 115 in The Intercept, “About 8.8 million workers — or roughly 5 percent of the national workforce — work for portfolio companies of private equity firms in the U.S. Private equity is known for colossal executive compensation, little regulation, and eager public pension fund and endowment investors.”

Local 115 has been working with the Private Equity Stakeholder Project to reach out directly to investors in Refresco parent companies, beginning with the Teacher Retirement System of Texas (TRS). At the TRS board meeting on September 17, 2021, Anthony Sanchez, a Refresco worker for 15 years, told the members of the pension board, “I would like to talk to you as investors about the conditions that we are working under there. We are working in unsafe conditions, with low salaries. The health insurance is bad, with very high deductibles, and high co-pays. Refresco is refusing to sit down with us and negotiate a fair contract.”

Another Refresco worker, Diana Acevedo, also told the trustees, “Refresco does not care about our well-being. They made us continue working during the pandemic with a lack of appropriate protection and sanitary supplies. There is a lot of favoritism in the plant. They change the schedules from morning to night at the last minute. They force us to work while we are ill and have a fever and are clearly sick. We want what is in the best interest of the workers. We want to be part of the union.”

On October 8, Sanchez and Refresco worker Nelva Castellanos addressed the board meeting of the Pennsylvania Public School Employees Retirement System (PSERS). Catellanos described inadequate insurance and poor treatment by supervisors. “Every week I pay $150 for insurance for my husband and me; I can't afford to put my kids on insurance because it’s no good and it’s too expensive, so my son and daughter are on NJ CHIP insurance.

“We are treated like animals. Our new supervisor doesn’t speak Spanish — and I hear supervisors now calling black people the N-word.”

Sanchez told the PSERS board members, “I am able to join you today because I am currently out of work with an injury that was made a lot worse by Refresco. The company wouldn't let me off work for medical care, so I had to keep working until I had enough Family Medical Leave Act time accumulated to take time off without losing my job. This took months, and the months I worked with an injury made everything so much worse and I had to get a more serious surgery.”

Refresco workers also delivered a letter from the executive board of UE Local 613, whose members work for the Western Pennsylvania School for Blind Children and are PSERS participants. The letter stated that “We do not want our retirement savings funding a fight against other workers,” and asked PSERS to discuss their concerns with PAI Partners and tell them to negotiate a union contract with the Refresco workers.

In addition to the TRS and PSERS meetings, Local 115 members addressed the board meeting of the Los Angeles County Employees Retirement Association on October 13, and submitted written testimony to the Washington State Investment Board.

Taking on a Massive and Hugely Influential Industry

Refresco workers are far from alone in their struggles against the influence of private equity. According to the Private Equity Stakeholder Project, “The private equity industry is massive, hugely influential, and playing a role in more and more aspects of life in the US and around the world. The industry manages nearly $7.5 trillion in assets and owns companies that employ more than 11 million American workers, plus millions more around the world.”

The number of workers employed by private equity continues to grow as firms are acquiring additional companies at a record pace. Focused on growing cash flows at the companies they buy, private equity firms often institute changes that have devastating consequences for workers, their families, and entire communities.

UE has joined a coalition of unions and other worker organizations, organized by the Private Equity Stakeholder Project, the National Employment Law Project and Jobs with Justice, which is organizing to demand that the private equity industry improve the way it treats workers. The demands include a sustainable minimum wage, paid sick leave and affordable healthcare, an end to occupational segregation, safe working conditions, protections in the event of layoffs and respecting workers’ rights to organize unions.

On October 21, Sanchez participated in an online forum hosted by the Private Equity Stakeholder Project and the Cornell ILR Worker Institute, along with other workers struggling against companies owned in part or in whole by private equity.

He described how it is difficult for him to pay his bills, support his family, and afford nutritious food on Refresco’s low wages. He also described how he and his co-workers beat the notorious union-busting firm Cruz and Associates, and a team of expensive DC lawyers including Jack Turner, a former executive secretary of NLRB. “We made sure to educate our co-workers so they could see right through the lies.”

He also reported that “problems that could be addressed through negotiations continue at the plant,” telling forum participants about two fires at the plant that occurred in the previous three weeks because of lack of maintenance and upkeep.

“Refresco just has no regard for their employees’ health,” he concluded.

“We will only continue the pressure”

Refresco workers’ struggle was also featured in an October article in the magazine In These Times, which detailed how Cruz and Associates has built a lucrative business off of “an especially insidious union-busting strategy: exploiting ethnic and linguistic differences to sow doubt and confusion among immigrant workers” — and how UE members at Refresco beat that strategy.

Local 115 activist César Moreira told reporter Alice Herman, ​“The only way to make a change is to pressure these people into understanding that we aren’t … animals to control at their will.”

Despite Refresco’s refusal to recognize the union, Local 115 has elected a bargaining committee and stewards and is actively challenging the company on the shop floor. Every time the union has demanded to bargain over an issue, the company has refused, hiding behind the excuse that the union is not yet certified (thanks to the company’s delaying tactics) — yet in each case the company has ended up settling the issue in the union’s favor.

“Refresco is dead wrong if it thinks it’s going to get us to give up,” Sanchez said. “If Refresco continues playing legal games, we will only continue the pressure on them until they accept reality.”