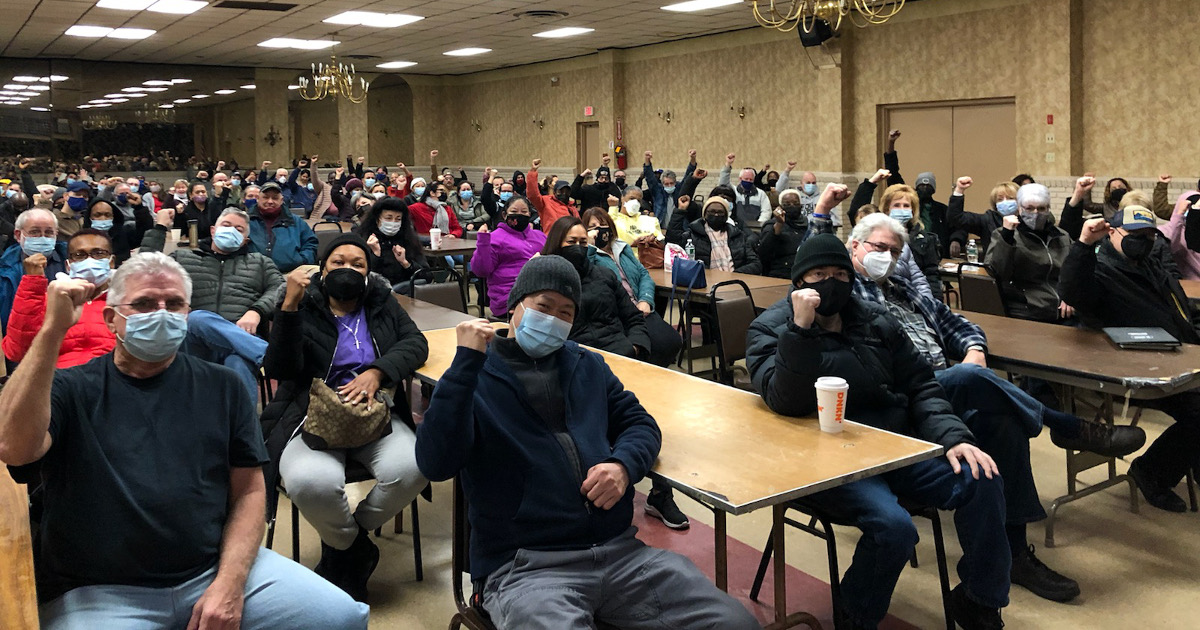 Members of UE Local 243 voted overwhelmingly to ratify a new three-year contract with Sargent Lock in early March. The new contract includes no cost increases to health, dental or vision insurance for the duration of the three-year contract — marking nine years running that Local 243 members will see no increases to their 100-percent company-paid medical plan. Local 243 President Wayne Morrison told the UE NEWS that the company no longer even proposes healthcare concessions.

According to Morrison, the membership’s primary demand in this contract was recognition for the fact that they “worked through the pandemic [with] cases in the factory daily.”

“We told the company, 'You guys are going to acknowledge that and take care of them.’”

Those members will receive a lump sum of $5,600 in the first year of the contract, double what the previous contract had provided (workers hired in the last ten months will receive $4,600). Wages will then increase three percent in each of the two remaining years. The contract also shortens the wage progression schedule so that workers are guaranteed to be at the maximum for their labor grade within one year, where previous contracts allowed up to four years.

The pension multiplier will increase by $3.00 in the first year of the contract. Morrison explained that front-loading the pension increase allows members who are considering retirement to reap the full benefit of the three-year contract in the first year.

A new step will be added to the vacation schedule, so workers will receive an additional 2½ days of vacation at six years of service (the existing steps are at three and ten years). Workers will now be able to carry over up to two weeks of vacation, and the new contract guarantees workers the ability to take a vacation or personal day to cover an absence from work.

The accident and sickness benefit maximum was increased from $450 to $600, and the shift differential was increased to $1.00. Hours worked on scheduled holidays will now be paid at double time, and bi-focal and progressive lenses will now be covered as part of the safety glasses coverage.

The new contact halves the time for temp workers to become full Sargent employees. As Morrison told the April Eastern Region council meeting during his report on the contract, “The first day [temps] start working there, they’re family. They’re human beings with families that need to be treated fairly.” In discussions with the company during negotiations, the union also convinced Sargent to switch to a temp agency that had more diverse hiring practices than the one they had been using. “We've always been a melting pot,” said Morrison.

During negotiations, the union also brought up the condition of the bathroom facilities in the plant, which Chief Steward Chris Fiorentino described as “deplorable.” The company is now doing a major overhaul of the bathrooms. The contract also includes a commitment that the union and the company will work together to draft language to implement Connecticut’s new legislation on paid medical and family leave, and to develop language explaining how any future pandemics will be handled.

Fiorentino told the UE NEWS that this was "one of the best contracts I've been part of,” something he credited to a “seasoned committee.”

Morrison said negotiations with the company went smoothly because “They know what to expect — we've established over years that you have to take care of our people.”