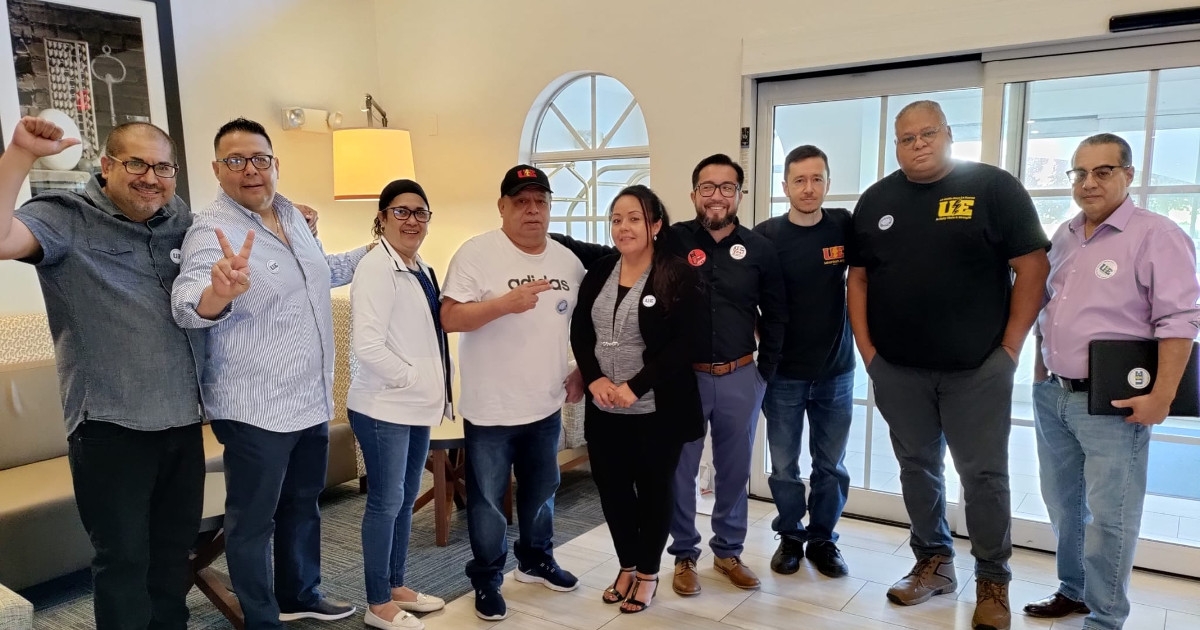 After beating company union-busting and winning a second NLRB election in May, more than 200 workers at the Refresco bottling plant, members of UE Local 115, are finally at the bargaining table with their employer. The elected union negotiating committee has been meeting regularly with the company since July, and has already reached agreement on several issues, including reimbursement for the cost of English classes, and the option to take additional unpaid days for bereavement leave — an important issue for Refresco workers, most of whom are immigrants and for whom loss of a loved one often means long travel to their home country.

“During the first union election last year, I abstained from voting,” said Jose Rivera, a member of the Local 115 negotiating committee. “But during the second election this year, because of what the company did with delaying the payment of our annual bonus and taking away a scheduled holiday from us at the last minute, I decided to vote for the union and I've been involved since then. We are hoping to achieve more consistent policies and fair wages, work hours, and medical benefits.

On August 18, a delegation of 20 Refresco workers joined the seven members of the negotiating committee to deliver a petition to management supporting the union bargaining committee and demanding a fair contract, with fair wages, hours, and benefits for all workers. The delegation also included several children of workers, who joined to demonstrate to management that the issues being negotiated in the union contract, especially hours of work, affect workers’ families as well. The petition was signed by over 150 workers, more than had voted for the union in the NLRB elections — a clear indication that support for the union is only continuing to grow in the shop.

UE has also been working with allies at the National Coalition for Safety and Health (National COSH) and the Private Equity Stakeholder Project (PESP) to put pressure on Refresco and its parent company, the private-equity firm KKR, which purchased Refresco in February 2022 in a deal that valued the company at $8 billion.

On Labor Day, with the assistance of PESP, Local 115 negotiating committee member César Moreira published an op-ed in Fortune magazine. In the op-ed, Moreira wrote:

Refresco says that it has a business to run and needs to keep its clients happy. However, the dismal working conditions, 12-hour shifts, low pay, and paltry benefits are negatively impacting production at the Wharton plant by leading to serious difficulties in hiring and retaining workers.

In fact, management admitted at the bargaining table a few weeks ago that they had 48 job openings (in a facility that currently employs about 220 non-managerial workers). If Refresco truly wants to maximize its business potential and ensure client satisfaction, then it needs to pay better wages, provide decent benefits, guarantee a safe workplace, and stop forcing employees to work mandatory 12-hour shifts.

Meanwhile, National COSH and its network of local health and safety coalitions have been gathering signatures for an online petition calling on Refresco to bargain a union contract in good faith, so that workers can secure fair pay, benefits, and safe working conditions.

Refresco workers are injured at alarming rates from lifting heavy objects and vibrating machines, they are prone to slips and falls because the factory floor is rarely dry, and workers have gotten mangled in unguarded machines. To add insult to injury, Refresco gives their workers inadequate health insurance that is not even accepted at the local hospital, so workers are left to fend for themselves after getting injured on the job. Furthermore, the 12-hour shifts that the company imposed during the pandemic lead to additional injuries from fatigue.

“We'd like things to be like they were before,” said negotiating committee member Jose “Pepito” Delgado. “When people here worked eight-hour shifts they were happier. There were also less accidents. Now instead of us being happy we're all unhappy all the time.”

“We are fighting for our rights,” added Erik Moran, also a member of the negotiating committee. “To demand that our rights be respected does not mean always fighting the company. The gains that we make will mean greater stability at the workplace and at home too.”