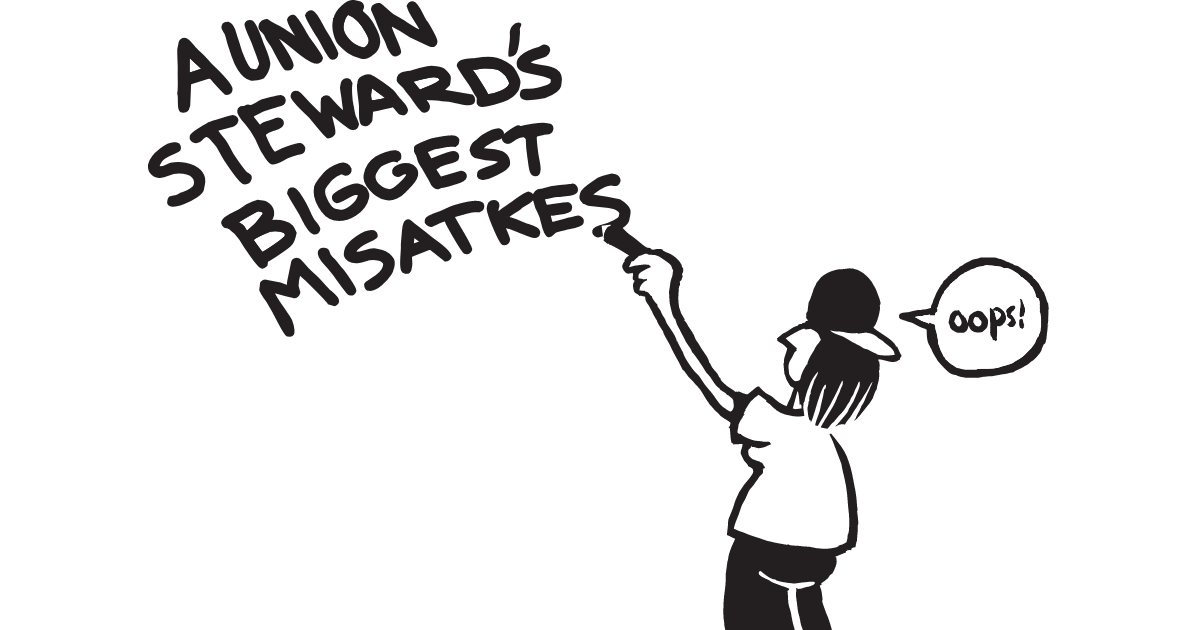 A good steward is many things - an organizer, a negotiator, a counselor, a peacemaker and a troublemaker.

But there are certain things that a steward must avoid at all costs:

Not only can this leave the union open to being sued for breaching its duty to provide fair representation, it’s just not the right thing to do. It undermines the whole purpose of the union and the very idea of solidarity. Every grievance should be weighed on its own merits, regardless of who files it.

Management is notorious for trying to get stewards to trade grievances. “I’ll let you have this case if you drop the one we talked about yesterday.” Every member deserves a fair shake and every grievance needs to be evaluated on its own merit. Never agree to anything you would be uncomfortable telling your entire membership about. Any group settlement of grievances should be done by the entire union committee, not the steward by themselves.

Stewards are much more than grievance handlers. They are the key people in the local who mobilize the membership. They must be talkin’ union and fightin’ union all the time. Each and every grievance and incident must be looked at in terms of how it can increase participation, build the union, and create new leaders.  The union is built by involving the members in winning grievances. From wearing buttons and stickers, to signing petitions, working to rule or acting as witnesses for the union during grievance meetings, these actions help build the union.

You’re hurting both the member and your credibility if you pass judgment on a grievance prior to a thorough investigation. Only after you have spoken to the grievant and witnesses and consulted the contract, the employer’s rules and past practices are you in a position to make that determination. Given the frequency of poor and mixed arbitration decisions, no steward should make promises about the expected outcome of a grievance.

The most important way a union gains the support of a new member or a potential new member is by one-on-one contact with the steward. You not only want to provide new workers with information, but need to build a personal relationship and begin to get them involved in union activities from their first day on the job. The steward should provide the new worker with a copy of the union contract, and sign the worker up into the union, and not leave that to management.

Even the strongest, iron-clad case can be lost if the time line specified in your contract isn’t followed. Even if management agrees to an extension, it is not in the union’s interest to let problems fester and grow. If you do get a formal extension of time limits, be sure to get it in writing.  If you can’t get it in writing make sure there are other union witnesses present.

Every grievance that goes un-filed undermines the contract people struggled hard to win. While most members see changes and problems only in terms of the impact on them, the steward needs to be able to understand a grievance’s impact on the contract and the union as a whole. Remember, the union has the right to file a grievance even if the worker involved doesn’t want to. When a basic principle is involved that could affect other workers, the steward should file the grievance.

When you meet with management alone, suspicions may arise as to what kinds of deals you might be making. It also allows management to lie or change its story. More importantly, when the steward meets with management alone, it takes away an opportunity for members to participate in the union and to understand that it’s really their organization. Sometimes it is hard to avoid meeting with a supervisor or foreman alone. They approach you at your workplace or call you into their office. If this happens, be sure you tell the other union reps what the discussion was about.

Mistake 9 - Failing To Get Settlements In Writing

Just as you should protect yourself by not meeting alone with management, be sure to get any settlement in writing. Putting the settlement in writing helps clarify the issues and keeps management from backing down. Many grievances are settled before they get to the written stage of the procedure. The steward should keep a notebook with all the important information concerning the settlement. Who was involved, what was the issue and what was the settlement. Remember, a grievance is any problem that arises. The hundreds of day-to-day issues that never reach the written grievance stage can be very important when trying to prove past practice. Facts, not vague memories, are needed to prove past practice.

It is the steward's responsibility to deal with the members in their area— keep them informed, investigate  problems, decide whether to grieve matters and do the first-step oral presentation of the grievance.  Sometimes stewards are tempted to pass the buck and refer members to the union president or another union officer.  While it is important to get advice and support if you are unsure about how to proceed, having a strong union means everyone does their part.

Mistake 11 – Failing to Work as a Union Team

Stewards are most effective when they work as a team. Each steward should know what is happening in different work areas.  Stewards should check with the chief steward, other officers or even older union members to make sure they understand past practices that may exist in the workplace.

Publicizing each and every victory is an important way to build your local union. This publicity not only has a chilling effect on the employer, but helps educate our own members on their contractual rights. All too often, members don't hear about union successes.  Let them know we've won and that it's a victory for the entire union.  It gives you something to celebrate, helps build pride in the union and builds the inspiration needed to carry on.

Based on “A Union Steward’s Ten Biggest Mistakes” by Tom Juravich and Kate Bronfenbrenner, with additions by The UE Steward.

Don’t let the boss con you. As a UE Steward, you’ve been elected to represent your members—a job that most bosses would like to keep you from doing. Here’s a brief list of some of your rights.