Getting Ready for a Fight 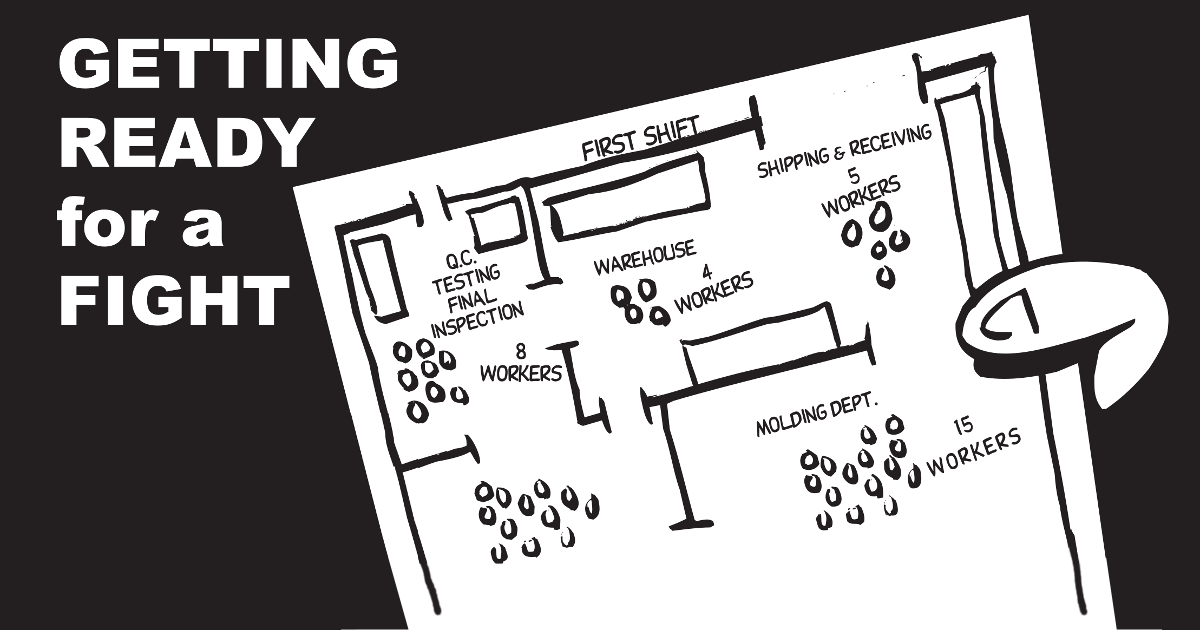 The union executive board at Telsa Coil Inc. is a little worried. Their contract negotiations begin in just 3 months. In the three years since their last contract there have been lots of changes in the workplace. Membership has increased because new work was brought in the plant, but at the same time some of the old work was moved to Mexico. Departments that once were the strength of the union now are half their size. New departments with a lot of new workers make up a large part of the shop.  Telsa is located in a state that prohibits union shops. Overall the union membership is good, about 90% of the workers belong to the union but with all the new hires, the e-board is still worried.

The Executive Board decides to call a meeting of all the officers and stewards.  “We need a plan,” announces the Local President Anne Hutchinson, “We need to get ready now.”

Mapping out the Workplace: Getting the Stewards & Steward's Helpers in Place

The heart of rank-and-file democratic unionism is the steward structure. The more stewards the better. Stewards have the most contact with workers in their department and can therefore provide union leaders with the best idea of how everyone is thinking.

Mapping out the workplace is a way to make sure that there is a union steward or a steward helper and therefore a union connection, in every part of the workplace. Often times the expanded steward system is referred to as a “contract support committee.” During organizing campaigns it is called the “organizing committee.”  Whatever you call it, the basic philosophy remains the same—in times of trouble a union needs a well-placed network of union activists.

Start with an actual map of the workplace - there may be one hanging on bulletin boards to show the fire exits.  Use one that shows not only the departments but all the hidden away areas, or work areas that workers are tied to and don’t leave for regular breaks or lunches.

A good UE steward structure doesn’t just have one union steward for each foreman but a steward for each area that needs one. Many times departments are too big or too spread out for one steward to be effective.

Remember, in times of negotiations, or during other battles, the union not only needs to know what the members are thinking, but needs an efficient system for getting the word back to the membership. If one steward has to get the word out to 75 workers in a hurry, it will most likely be hard to do.

Looking at a map of the workplace may show that the stewards need helpers, especially during contract negotiations. It is easier for the union steward to deliver a message to 5 or 10 people who in turn each tell 5-10 more people, than having the steward responsible for talking to 75 workers.

So who should a helper be?  Similar to a steward, they should be someone who wants to be active in the union. They must be level-headed and someone who will put out the union message, even if they might disagree with it sometimes. They need to be the type of person who not only can talk to other workers but LISTEN to them as well.

With a steward structure in place along with helpers if they are needed, the union is then ready to tackle other problems.

How to Get New Stewards and Helpers

There is no better way to get new union stewards or recruit helpers than talking to people. Systematically ask the workers in a given area- “Who would be a good union steward?” or “Who in this area do the other workers trust?” and finally, “Has anyone been a union steward before?”

The union can also talk directly to people who might fit the bill. Talk to members that once were stewards but dropped out for personal reasons. During a time of crisis they may be willing to step forward and help out.  Check the sign-in sheets for union meetings; members who regularly attend might be willing to take a bigger role in the union. Don’t simply ask the department loudmouth, often times they aren’t respected by the other members. Find out what the other workers think about them first.

When talking to members about becoming a steward, don’t take it for granted that they understand what it means to be a steward.  Assure them that they won’t be left on their own to fight the employer.  Show them the educational material the union has to help them; UE Steward Newsletters, UE Steward Handbook, and the UE Leadership Guide.  Contact the Field Organizer or the UE Education Department to request steward’s training.  Finally be sure to explain to them what the union will need them to do during the upcoming negotiations or a possible fight with the employer.

In a workplace like Telsa Coils with new workers, where workers have the option of not joining the union, the union must make sure that they have a program for talking to the non-members and welcoming/educating new workers. This is true for every workplace, whether or not they have a union shop or an open shop. Just because a union has won union shop language, and workers must become members of the union, it doesn’t mean they understand why they are union members. It is up to the union to provide this explanation.

Talking to the Non-member

There are going to be some nonmembers that are thick-headed, cheap or want to suck up to management. There are others that may not join because they just don’t understand unions. Going over the material showing how the union has made improvements may help to overcome their reluctance to join.

Contract negotiations is an opportunity to try to get them involved in whatever the union is doing to make their feelings known to management. Ask them to wear the sticker or button protesting increased co-pays on the health insurance. Ask them to wear a button or sticker demanding a livable pension. Ask them to join the practice picket line before or after work.  When they are taking part in this activity it makes more sense to then talk to them about the privileges of belonging to the union.

Here are some tips on dealing with newly hired workers. This is good advice for all work places, not just those where new employees have the option of not joining the union.

When should the union welcome new members?

Start by welcoming them on their first day on the job. The department steward should introduce himself or herself and give the new worker a brief rundown on the union and the workers rights. Most workers starting a new job will be thankful to see a friendly face and to have someone to talk to about the union and the job.

Sign up the Worker on a Union Card Right Away

They need to know how much they are and what they are for. Most workers, especially young people, have never belonged to a union. All they know is the bad propaganda that they read in the newspapers. Some workers may have belonged to a corrupt or do-nothing union, so it is important to explain how UE is different.

Develop a Short History of Your UE Local

Write about the union’s accomplishments in improving the wages, benefits and working conditions at the workplace. Many new workers won’t think that “Telsa Coil Inc.” is a good place to work because the union made it a good place to work. They think that there must be “good bosses” who made “Telsa Coil Inc.” a good job. It is up to us to educate them. It is not too hard to put together a brief outline of union gains. What were the wages, health insurance, and vacations like? Was there favoritism and no way to solve problems? Contrast this with the current wages and benefits, and list some problems solved using the grievance procedure.

“Seniority,” “grievances,” “union contract” may be confusing words to a new employee. Don’t take it for granted that the new employee understands union terms. The union steward must take the time to explain what these and other terms mean. The worker may not even know what a union steward is, and maybe surprised and confused when someone introduces themselves as “Hi, I’m your steward.”

Talking With the Membership

In a recent contract fight, waged by a different union, the union called for a strike over health insurance and the fact that most workers had none. This of course gathered the union much-needed publicity and public support.  The problem was that for most of the workers health insurance was not the big issue; wage rates were the key issue. As a result, most of the workers did not go out on strike. The strike, while a valiant effort, was not as successful as it could have been.  The union had a plan, but it would have been a better and more successful plan if the union had talked with and not talked at the workers.