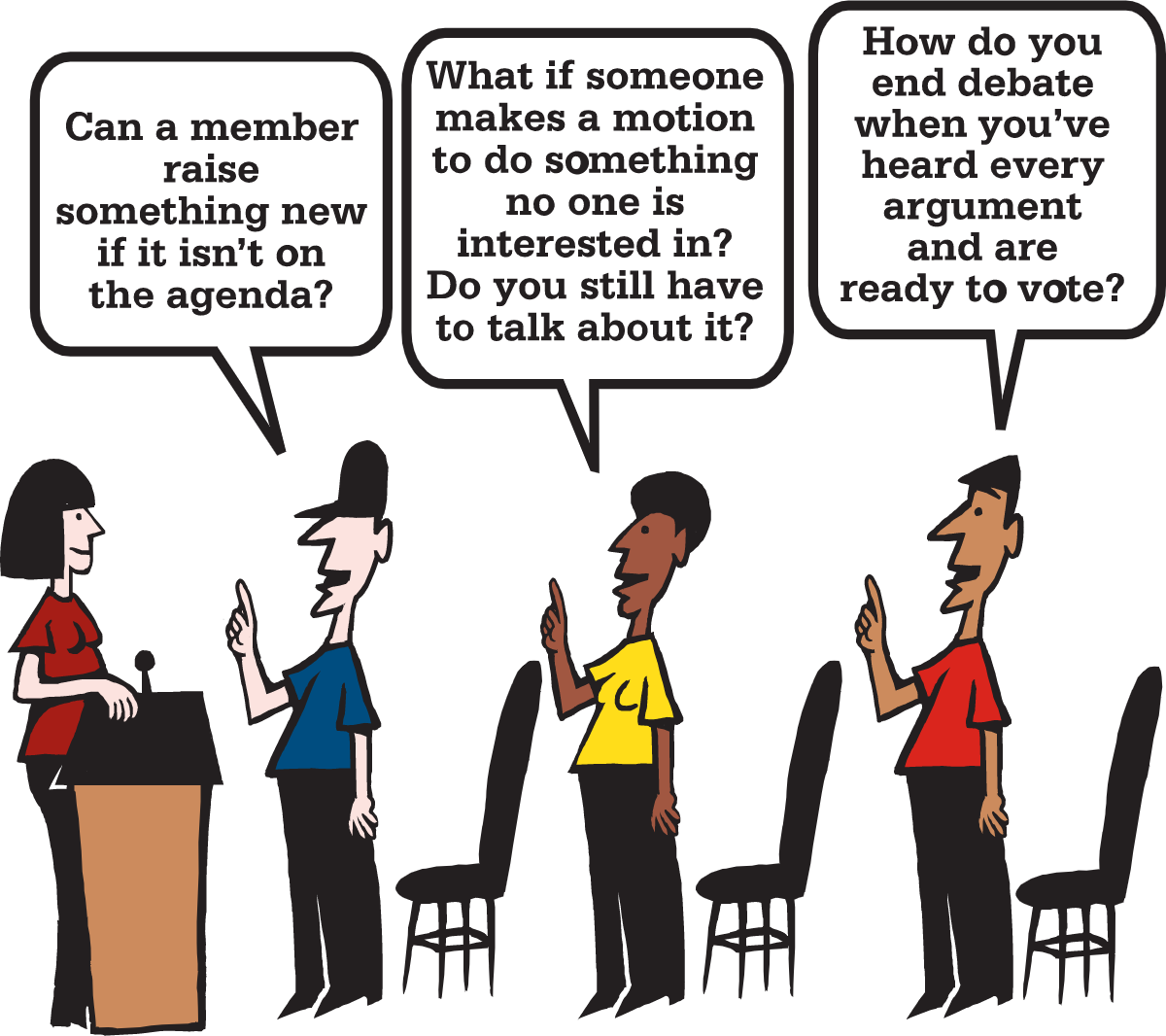 Ralph and the other officers of the Union were trying to figure out why fewer and fewer members came to the regular monthly meetings. Ralph said, "I asked Rachel why she doesn't come to meetings any more. You know what she said? 'It takes forever for anything to get decided. Last time the meeting went on for 3 hours. Everybody was talking about different things, so nothing ever got settled.’ There's got to be a better way to run a meeting." Sarah said, "You know, there's that part of the Leadership Guide that talks about how to run orderly meetings. Maybe we should read up on it."

Except for contract time, it's tough these days to get members to meetings. Members have family obligations, or there's the other part-time job to get to. This makes it even more important to make Union meetings interesting, orderly, and concise.

UE has developed a standard agenda for Union meetings, which is at the end of most UE local constitutions. UE also recognizes that meeting rules have to be flexible and the agenda adaptable to the situation in order to keep the members coming to meetings.

Tips on running the meeting

The agenda does not necessarily have to be in the traditional order. If there is a really pressing issue it may be better to take up that item at the very beginning of the meeting, rather than make everybody wait until the "new business" point comes around. Waiting often makes people edgy, especially new people who have come to their first meeting to discuss a problem.

It is extremely important that the financial report be given at every meeting. This shouldn’t be one of the items that is dropped because of pressing business.

A meeting can be smoothly run without the Chairperson announcing, "We are going to follow Robert’s Rules of Order." Most members won't know what this means. Instead the Chairperson can announce some simple rules for the meeting.

If someone is being obnoxious and disrupting the meeting they can be asked to leave. The Chairperson can take a vote asking the disrupter to be quiet or leave the meeting. This way the disruptive person knows that it is the members that disapprove of their behavior, not just the Chairperson.

If it appears that there is not much business to be done at a meeting, think about inviting in a speaker to briefly address an issue, like some pending legislation that the members should know about. Another possibility is showing a labor video. Many videos are available on the UE YouTube page at https://www.youtube.com/UEtube.

The Basics to Robert's Rules and Order

UE, like most membership organizations, has adopted "Robert's Rules of Order" as our “parliamentary procedure,” or the set of rules on how to run a fair and orderly meeting.

Why have rules? The basic idea is for everyone to have their say, without anyone dominating the meeting. There is a procedure to ensure that questions can be handled in a democratic manner, but if people start to repeat themselves, any member can make a motion to end debate and "call the question." The Chairperson's job is to balance keeping things moving while allowing full discussion.

People only speak after they are recognized by the Chairperson. Only one person at a time speaks.

People must stick to the issue that is being discussed. If the discussion is on whether to arbitrate a grievance, then Joe can be ruled out of order if he starts talking about when the Negotiating Committee should be elected. (This should be done diplomatically though.)

There is a more detailed explanation of parliamentary procedure in the UE Leadership Guide, in Chapter 6.

Tips for Running a Meeting Online

Many UE locals have shifted to holding their membership meetings online through platforms like Zoom. Doing so has the advantage of allowing members to join from anywhere and removes the challenge of finding a meeting space for locals that don’t have their own hall. However, not everyone has access to the same technology, which creates barriers for participation. Additionally, because members are not in a room together, it can be easy to get distracted by things occurring in the member’s home (or from wherever they are joining). Here are some tips to keep online meetings running smoothly.