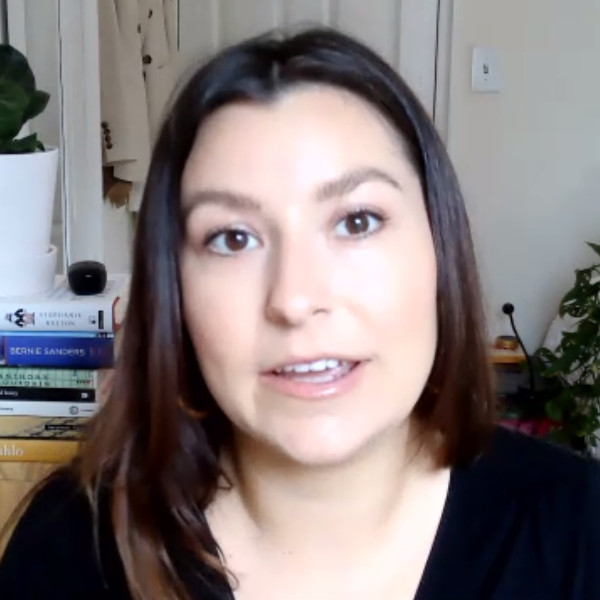 The American Rescue Plan Act, she told delegates, is “one of the most significant pieces of legislation to happen for the working class in this country” in decades. “And that is because of you,” she added. “That is because of people like you who have been organizing day in and day out for decades now, demanding that we have a government for the people.”

Rebik noted that, although it didn’t contain everything Sanders and the labor movement wanted (most notably, a minimum wage increase to $15 per hour), ARPA is a $2 trillion spending bill which gives “zero” money to corporations and the wealthy, with all of the money going directly to working-class people and state and local governments.

For the next major legislative package, the American Jobs Plan, she said Senator Sanders is very focused on expanding the definition of “infrastructure,” investing in people-centered infrastructure like healthcare and education in addition to physical infrastructure.

Senator Sanders is also pushing to expand Medicare by lowering the enrollment age to 55 and expanding the program to cover eye glasses, hearing and dental, and prescription drugs. He is working to make sure that programs to address climate change are approachable and accessible for working-class people, and is pushing to expand workers’ rights to organize unions and to raise the minimum wage to $15 an hour.

She described Sanders as a “very pragmatic guy who really wants to get stuff done,” but emphasized the importance of rank and file political action in order to move forward a pro-worker agenda.

“It’s the organizing that happens in local communities,” she said, that builds the power that can make Congress accountable to working people, and “We need you guys to keep the pressure on to get it done.”

UE General Secretary-Treasurer Andrew Dinkelaker said in his address that the only way forward for the country is to address people’s basic economic needs. He said there are opportunities for workers under the Biden administration, and contrasted the pro-worker video that President Biden released in February with President Ronald Reagan’s firing of the PATCO strikers in 1981, an action that set the tone for four decades of union-busting. He also gave a report on plans for the 2021 UE Convention.

International Representative Mark Meinster gave the organizing report. UE is currently engaged in organizing campaigns among two large units of graduate employees at public universities in New Mexico, where public-sector workers can organize by “card check” (simply signing a majority of their co-workers up on union cards). At the University of New Mexico in Albuquerque, workers have signed up a super-majority into the union, but the administration is challenging graduate employees’ status as workers. UE is fighting this through the legal process, but also organizing a pressure campaign on the university. The new UE members are, nonetheless, moving ahead: setting up a steward structure, collecting bargaining surveys, and getting ready for bargaining.

In California’s “Inland Empire,” Meinster reported, workers at Slow Bloom Coffee Cooperative continue to set up their worker-owned cooperative, which will be a UE shop. The workers at Slow Bloom are former employees of Augie’s Coffee who were fired in July of 2020 after demanding union recognition. “Workers have basically decided, ‘we can run this business ourselves,’” Meinster explained.

UE Field Organizer Hayden Schortman introduced two members of the Kenyon Student Worker Organizing Committee, Nick Becker and Sally Smith, who reported on their one-day strike in March and their ongoing efforts to convince Kenyon College to recognize their union. UE Local 712, which represents maintenance workers at the college, has been actively supporting their organizing efforts.

“Putting up the fight day by day”

During shop reports, Local 735 President Teresa Willibey reported on difficult negotiations at Autoline Industries in Butler, Indiana, which led to an outpouring of support and solidarity from other delegates in the Zoom chat. “I’m just putting up the fight day by day, trying to cover everybody’s backs,” she said. Regional President Charlene Winchell reminded Willibey, “You are a very strong woman and they [management] know that. You guys keep fighting and you keep winning.”

Local 1186 President Thayer Reed reported that her local had recently celebrated the one-year anniversary of signing their first UE contract at Willy Street Co-op in Madison, Wisconsin. She said her local’s recruitment drive was going well, and that they had bargained a new agreement on COVID-19 protections, despite management initially refusing to bargain protections after a year. She attributed their success to “uniform backing of what we were fighting for” in the shop and “good communication and staying in touch with our members.”

Local 1008 Chief Steward Taylor Osborn reported on a number of grievance wins at the US Citizenship and Immigration Services (USCIS) service center in Laguna Niguel, California. A grievance on behalf of a member who was made to pay insurance premiums while on unpaid leave resulted in her qualifying retroactively for FMLA leave. Under Local 1008’s contract, workers are entitled to receive health and welfare funding to cover their premiums while on FMLA leave. “If we hadn’t challenged that situation, that member would have paid $1700 for health insurance,” Osborn said.

Local 1421 President Bryan Martindale reported that six quality assurance specialists in the lab at his shop, Stepan, voted to join the union, and that negotiations for them would begin soon. Stepan is a chemical manufacturing plant in Anaheim, California.

“We need all hands on deck” 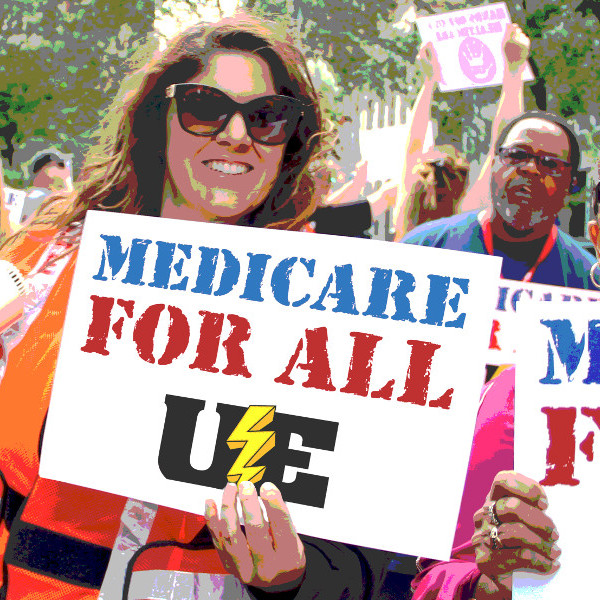 Juliet Uata, Local 1008, reported on the 2021 Medicare for All Strategy Conference in January, which was attended by 20 UE members, leaders, staff and retirees. The conference was “incredibly eye-opening,” Uata reported. She learned that “The U.S. has the most expensive healthcare system, but we don’t take care of everybody.”

She particularly recommended two documentaries she learned about at the conference, “Fix It: Healthcare at the Tipping Point,” which is available on Youtube, and “Power to Heal,” a film about the role of Medicare in desegregating U.S. healthcare.

The Medicare for All Act of 2021 was introduced into Congress on March 17, Uata reported, and currently has 115 co-sponsors. “We need more sponsors for this bill,” she said, and noted that UE ally National Nurses United is coordinating efforts to pressure more members of Congress to sign on. (NNU has set up a Medicare for All hotline at 202-953-4101 which will connect you to your member of Congress and let you know if they are a co-sponsor of the bill).

She urged all UE members to save the date for May 15, when UE Director of Education Kari Thompson will be conducting the workshop “How to Fix Healthcare” over Zoom. “We need all hands on deck for this initiative and for this cause,” Uata said. “We cannot live well if we do not have great health, and so we need our healthcare system to truly take care of everyone.” (Members interested in attending the workshop should contact their staff representative or regional president for information.)

President Winchell reported that Cristian Corea and Fatima Anda, Local 1018, and Thayer Reed, Local 1186, will represent the Western Region in the UE Women’s Caucus. The region also renewed its dues to United Working Families and Chicago Jobs with Justice. 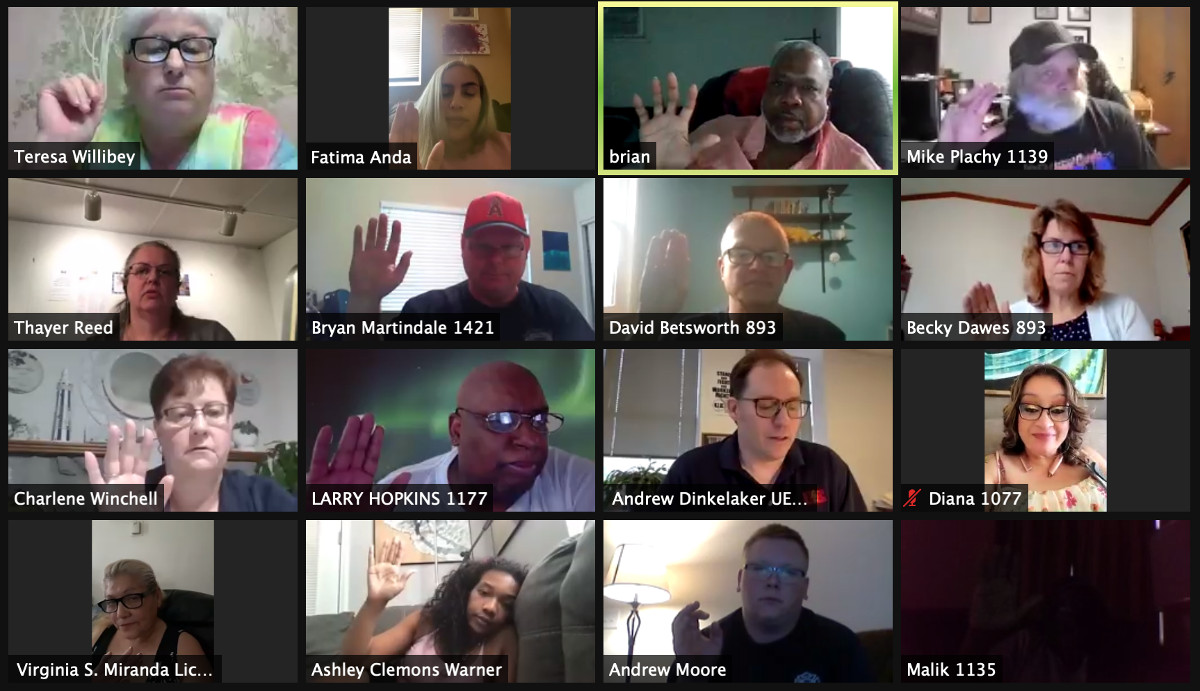 Western Region officers, trustees and executive board being sworn in by General Secretary-Treasurer Andrew Dinkelaker