New Administration “No Savior,” but Offers Opportunity to Fight and Win 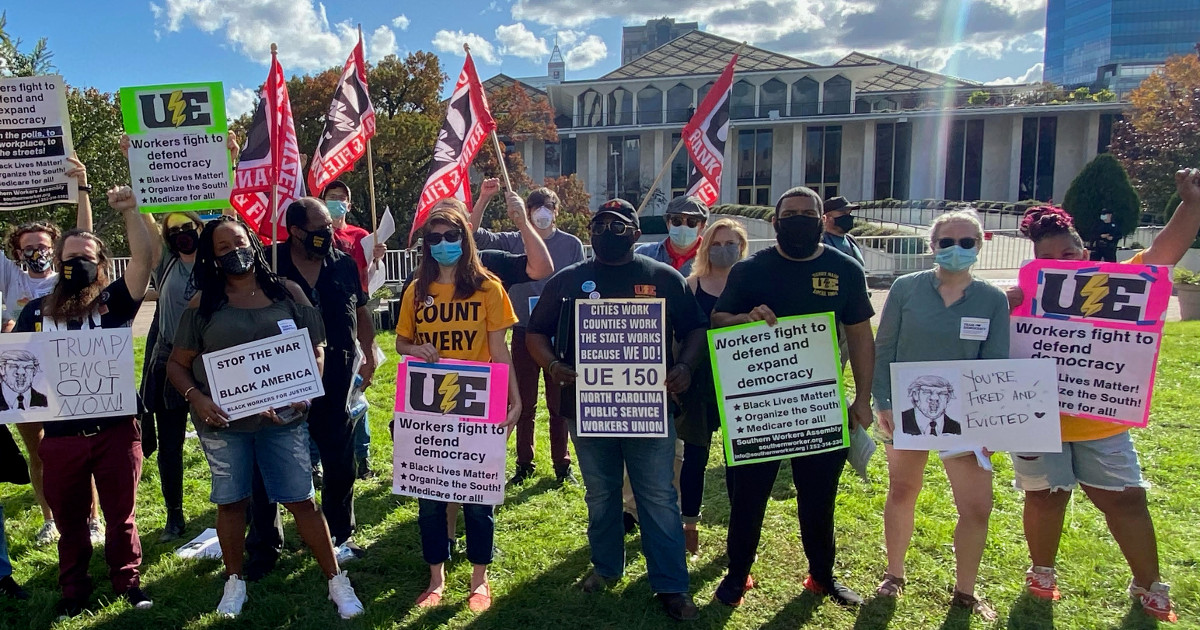 In August, the UE General Executive Board issued a statement declaring that “The working class cannot afford four more years of Trump,” and urging “UE members and locals to make every effort to oust Trump from office in the November elections, recognizing that the only way to do that is to elect Joe Biden.”

In an election season that often seemed to be a referendum on Trump’s personality, the GEB statement focused on Trump’s actions: “President Trump has attacked workers’ rights much more aggressively than any of his predecessors, weakening regulations and stacking the Department of Labor, the National Labor Relations Board and OSHA with corporate henchmen. His appointments to the Supreme Court resulted in anti-worker rulings, including the Janus decision to weaken public-sector unions, and his ongoing effort to fill the federal courts with anti-worker judges promises more such decisions well into the future.”

On November 3, in an election with record-high turnout, Biden was elected president. According to the only national exit poll (available on all major news and political websites), working-class voters made up a larger share of the electorate and voted more Democratic than in the 2016 presidential election, while households making over $100,000 per year voted more heavily for Trump. People in union households voted 57 to 40 for Biden this year, a significant shift compared to 2016, when Trump only lost the union household vote by eight points.

“Attacks have increased under President Trump”

Biden’s victory owes more than a little to the efforts of Vermont Senator Bernie Sanders, whose presidential bid UE endorsed at the 2019 convention. Despite being forced out of the race after the Democratic Party establishment coalesced around Biden, Sanders brought his grassroots campaigning style to the general election, echoing UE’s message that although Biden is a flawed candidate, it was critical to defeat Trump. 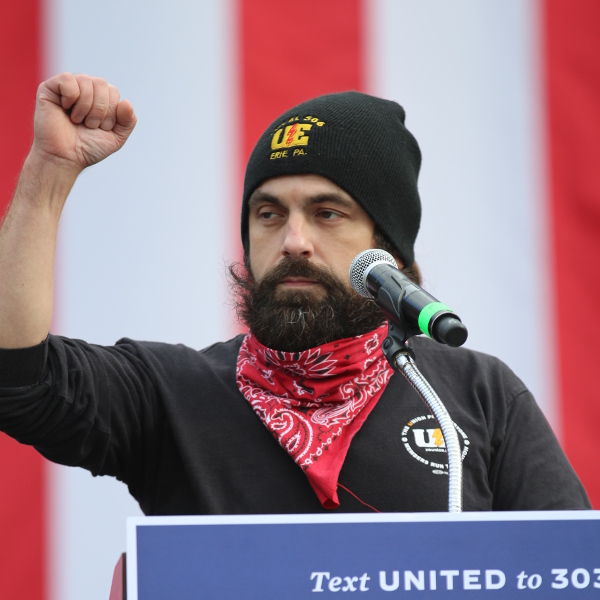 UE Local 506 member Bryan Pietrzak spoke at a late-October socially-distanced get-out-the-vote car rally with Sanders at the historic Carrie Furnace site in Rankin, PA, just outside Pittsburgh. “Over many decades now, the Republican Party has worked to undercut unions, organizing, and collective bargaining as well,” said Pietrzak. “These attacks have increased under President Trump, who has no problem with our families struggling day in and day out so long as his friends and cronies on Wall Street see the numbers in their bank accounts go up.

“As a result, we've seen inequality rise, and no matter how hard we work, it's increasingly difficult to keep up.”

Several UE locals also worked hard to engage their membership in both the national election and state-level races. Local 150, a statewide local in North Carolina, mailed 1500 leaflets to 100 activists for them to distribute, phone-banked their members, and launched a “take two” initiative to encourage members to take two co-workers, family members or co-workers with them when they voted. They also endorsed Jessica Holmes, a candidate for state labor commissioner.

In Iowa, statewide Local 893 incorporated political action into every sublocal meeting during the fall. Local leaders emphasized the importance of not only voting to recertify their union, but also wresting control of the state legislature away from the anti-labor Republicans who passed the anti-worker legislation in 2017 that decimated their collective bargaining rights.

In California, Local 1018 endorsed Proposition 15, which would have amended the state constitution to allow the state to collect fair property taxes from commercial properties. This measure would have netted between $6.5 and $11.5 billion in desperately needed new state revenue. This would have benefitted the clients served by Local 1018 members by improving their schools and providing more resources to the Lanterman Center where Local 1018 members work. The local presented information about the proposition to their October membership meeting and encouraged members to participate in a “15 days of phone-banking for Proposition 15” effort.

Unfortunately, despite the best efforts of UE activists in all three states, all of these electoral efforts came up short.

As Election Day neared and polls showed Biden with a significant lead, both the Trump administration and Republican strategists explicitly stated that they might attempt to disrupt the full counting of ballots, and refused to pledge to accept the results. The week before the election, UE’s officers released a statement, “Labor Must Defend Democracy,” declaring that:

The labor movement has a special obligation to defend democratic government. Corporations and the wealthy already are able to buy influence on government policy. One of the few counterbalances to this is the fact that politicians have to face the mass of voters every two, four or six years. If incumbents can simply declare that certain voters’ votes don’t matter, corporate influence on our government will only increase and the working class will suffer even more.

UE also played a lead role in organizing “Labor Action to Defend Democracy,” a network of over 250 local and regional union bodies that committed to take action in the event that Trump lost the election but refused to leave office. The day before the election, UE General President Carl Rosen emceed a press conference of Chicago-area labor leaders expressing their determination to ensure a fair election. “We’re going to take whatever steps we need as a labor movement to make sure that democracy stays in place in this country,” Rosen said.

Indeed, late Tuesday night, Trump falsely declared victory based in part on his early lead in Pennsylvania, while hundreds of thousands mail ballots remained uncounted (mail ballots tended to favor Biden, as Trump had encouraged his supporters to avoid voting by mail.) In response, people throughout the U.S., including many UE members, joined “Protect the Results” rallies on November 4, the day after the election, making clear their determination that democracy be respected.

Most major media organizations called Pennsylvania for Biden on November 7, thus giving him enough electoral votes to be declared president-elect. However, Trump has yet to concede the election, and his campaign has filed a blizzard of lawsuits alleging voter fraud — with zero evidence.

Since neither candidate has conceded, the selection of “electors” by state legislatures will be what actually determines the election. (Don’t know what an “elector” is? You’re not alone! See “The Strange Career of the Electoral College.”) While states traditionally select electors pledged to vote for the candidate who won the popular vote in their state, this is not legally required in all states. A number of states in which Biden won the popular vote have Republican legislatures, who could in theory buck the voters and select Trump-supporting electors. “If that happens, that’s a coup,” President Rosen told the Western Region meeting on November 7.

The GEB statement points out that “We are clear that Biden is no savior, and will likely seek to implement the same kind of corporate-friendly policies as previous Democratic presidents Obama and Clinton.” This outcome is made more likely by the weakness of the Democratic Party’s performance in senate, congressional and state races.

Despite polls indicating that Democrats were likely to take control of the Senate and gain seats in the House, they only picked up a net of one Senate seat, and appear to have lost around ten net seats in the House (though still retaining control). Democrats also believed they had a good shot of picking up state legislative chambers in many states, including Iowa. Not only did they fail to do so, they unexpectedly lost control of the state legislature in New Hampshire. UE members in Iowa, who have been working under a draconian anti-union measure passed by the Republican legislature in 2017, know full well that control of state legislatures by anti-union forces has a direct impact on their rights.

While control of the Senate will now be determined by two runoff elections in Georgia, Democratic victories in both races would give the Democrats only the barest of majorities (an even split, with Vice President Harris able to cast deciding votes). If Republicans prevail in either contest, Senator Mitch McConnell will retain control of the Senate, and continue to use that power to obstruct any attempt to pass pro-worker legislation.

Under either scenario, the Biden administration will undoubtedly use Democratic weakness in the Senate as an excuse not to press for the legislation that working people desperately need: an economic stimulus to get people back to work, emergency health care relief, labor law reform and action on the climate crisis.

The GEB statement concludes that after the election, UE members should “be prepared to fight like hell to hold a Biden administration accountable to the people.”

There is good reason to believe that popular pressure can be mobilized to pressure Biden and Congress, especially if labor takes a leading role. While Democrats turned out not to be particularly popular in the recent election, pro-worker policies were. In Florida — one of the few states in which Trump did significantly better than in 2016 — a super-majority of voters passed an initiative to institute a $15 minimum wage. A Fox News exit poll the night of the election also found that 72 percent of voters were in favor of switching to a “government run healthcare plan” (i.e., Medicare for All).

The Labor Campaign for Single Payer reports that “Even though the Democrats lost seats in Congress, not a single cosponsor of the Medicare for All Act was defeated. ... Even Medicare for All supporters in swing districts, like Katie Porter in Orange County California, were re-elected while swing district opponents went down in defeat.”

The GEB statement on the elections noted that “Our only long-term solution is to build working-class power, both in the workplace and in the political arena, independent of the Democratic Party.”

As this election demonstrated, the U.S. remains divided and polarized, and that polarization is evident inside the working class, due in no small part to very real grievances against the Democratic Party. If the Biden administration fails to deliver for working people, working-class disaffection from the Democrats will only increase.

In recent decades, the Democratic Party establishment has aspired to become the party of the urban managerial and professional class, relying on Black and Latino working-class votes to win elections. The small but significant movement of voters of color into the Republican column in this recent election, however, demonstrates that the Democratic Party can no more take their votes for granted than they can those of union members.

As delegates to UE’s 2019 convention declared in the resolution “Independent Rank-and-File Political Action”:

We continue to believe that until American workers have an independent political voice and our own political party we will be forced to struggle on an unlevel playing field. UE follows the path of independent political action. We support or oppose candidates based upon their actions, not their words or party label. We do so with confidence that many millions of working people support our cause.