The Role of the UE Steward in an Election Year 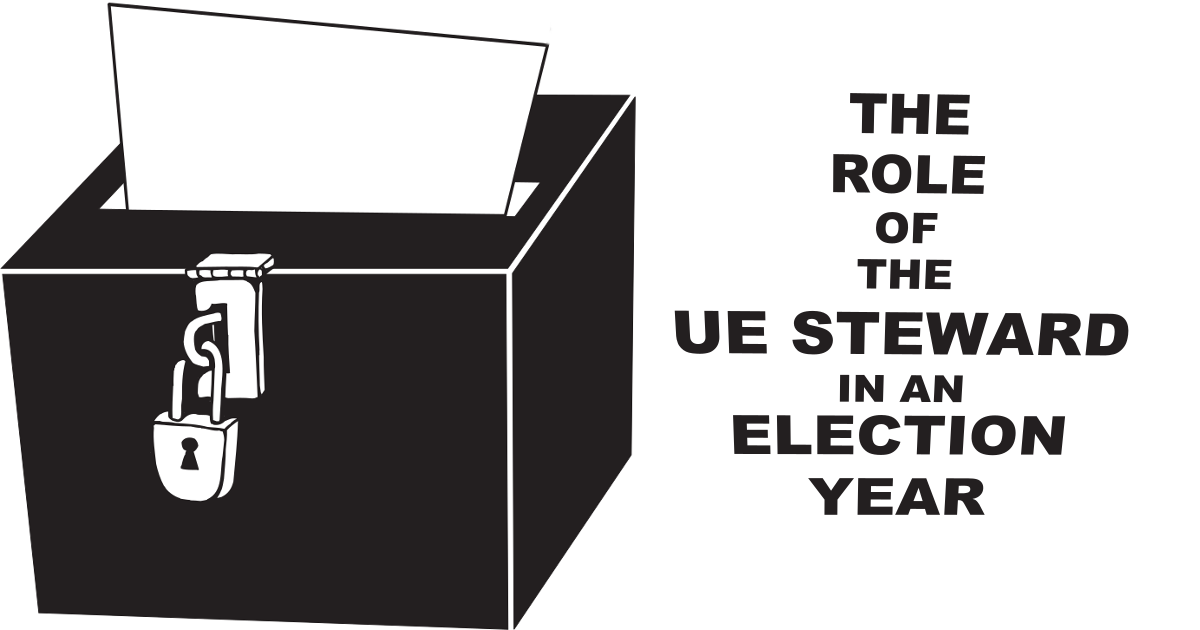 “There is a difference between political action and playing politics. When we fought the politicians and we won what legislation we did, UE didn't play politics; we engaged in political action. We didn't rub bellies with the politicians. There was plenty of air between us. You could see light. Today, try to find some air and light between the bellies of labor leaders and the bellies of politicians. No go. You won't find it. They are playing politics.”
—UE Leader James Matles, addressing the 1975 UE National Convention.

There is a major difference between member-driven political action based on sound UE principles, and “playing politics” with lawmakers and candidates. With critical national and state elections coming up on November 3 – and some important primary elections before that – every UE steward and leader must take some time to become familiar with our union program, as well as the nuts and bolts of the electoral system. While for some people political discussions can be controversial and stressful, as unionists we have to participate in the political process to protect what we have worked so hard to negotiate at the bargaining table. These days, union political action is a necessity, not a choice.

Our union decides – with full rank-and-file input and with discussion and voting at our convention – what positions we will take on political issues and what we will do about them. The 76th UE National Convention in August 2019 debated and adopted 28 resolutions dealing with a range of political issues that impact working people and our union. These resolutions are compiled in the booklet, “UE Policy 2019- 2021”, which has already been distributed to every UE Local. If you haven't seen it, ask your local officers for this booklet. You can also find UE’s policy on UE’s website: ueunion.org under the tab: “UE Policy.” Take some time to read the current UE Policy, and pay special attention to the Report of the Policy Action Committee, which included the main "action items" set as the union's priorities by convention delegates. The Policy Action Report guides our union to focus on the most critical political action tasks that confront us.

The Need for Political Action

With tens of millions of workers losing their jobs and their employer-based health insurance, UE members have stepped up the fight for Medicare for All. UE is also supporting the Health Care Emergency Guarantee Act, which would have Medicare pay for all necessary medical expenses for all uninsured and underinsured Americans during the pandemic.

Meanwhile, our unions are under attack as President Trump has weakened labor regulations and appointed pro-boss lawyers to run the National Labor Relations Board. Trump’s appointments to the Supreme Court resulted in the Janus decision to weaken unions in the public sector, and his ongoing effort to fill the federal courts with anti-worker judges promises more such decisions in the future.

In order to create more favorable conditions to win on these and other issues of concern to working people, defeating Trump and electing more pro-worker candidates at all levels of government is critical. UE’s resolution on Independent Rank-And-File Political Action pointed out: “While the outcome of the 2020 elections will have major consequences for working people in this country, and it is critical that working people remove the anti-labor and racist Trump from office, we continue to believe that until American workers have an independent political voice and our own political party we will be forced to struggle on an unlevel playing field. UE follows the path of independent political action. We support or oppose candidates based upon their actions, not their words or party label. We do so with confidence that many millions of working people support our cause.”

In addition to electing a President, the 2020 elections are going to determine which party controls the U.S. Congress, 50 state legislatures and the governors of 11 states, including Indiana, New Hampshire, North Carolina, Vermont and West Virginia.

UE's approach to elections is different from that of many other unions. Unlike most unions, whose candidate endorsements are chosen by their top leadership, UE’s rank-and-file members decide which candidates to endorse, if any. We look at where the candidates stand on the issues of greatest concern to workers, and we share that information with members so they can make a sensible decision for themselves. We look at their stated positions on the issues, their voting records, and their backgrounds.

UE does not give money to candidates, from either party. The national union has no political action fund for making campaign donations. (A few UE locals have small political action funds, raised from member donations, and make contributions to endorsed candidates.) UE focuses our energy on voter registration, education, voter turnout – and in mobilizing members on the issues we're concerned about. We do that before, during and after elections.

Some unions support Democrats, almost automatically, and give them money regardless of the individual politician's record. UE is independent of both major parties, and candidates need to earn our support.

The Policy Action Report adopted by our convention delegates last year encouraged locals to “carry out workplace activities to ensure that members are informed, registered to vote, and turn out to vote on election day.” Getting your fellow workers to fill out voter registration forms may not sound like the most exciting thing you'll ever do, but it is extremely important if we want to have an impact on Election Day. Here are some steps to take:

Here are some other good resources for political action: