Inflation, the Cost-of-Living Crisis, and the Danger of Recession

The economic situation working people find themselves in right now is, to say the least, confusing. All of us are paying higher prices for the basic necessities of life, especially at the gas pump and the grocery store. On the other hand, as reported in recent UE NEWS updates, many UE locals are negotiating the best contracts they have seen in years, and some locals have even been able to convince their employers to raise wages mid-contract.

The inflation we’re seeing in the prices of basic goods like food and gas is just the latest blow to the living standards of working people — we have been facing a cost-of-living crisis for decades.

As UE General President Carl Rosen explained in an op-ed published by the Chicago Tribune on September 19, "Since the 1980s, employers have been shifting health care costs onto workers, eliminating pensions and replacing them with 401(k)s and keeping wages low. Globalization and the shift to a service economy have meant the destruction of good union jobs and their replacement by part-time, temporary and low-wage jobs. Meanwhile, the costs of housing, health care, education and child care have risen much faster than workers’ incomes.

“In fact, inflation has become a major political issue only because, unlike the costs of housing, child care or health care, it affects the wealthy. Inflation eats into the value of saved money, which they have, and it reduces the burden on those who owe money — the working class.”

In other words, corporations aren’t worried about inflation for the same reasons working people are (the costs of food and gas) — they are worried that the massive amounts of cash they have accumulated from exploiting workers and getting handouts from the government is going to be worth less. Whereas for working people, while rising prices eat into our budget, our debts (mortgages, car payments, student loans) become less relative to our rising wages.

This “depreciation” of the cash hoarded by corporations and the wealthy is why corporate politicians have suddenly become concerned about rising prices — in ways that they never are about the rising costs of housing, healthcare, education or child care.

Most if not all UE locals are reporting that their employers are having a hard time hiring people — and this is the leverage those locals are using to negotiate higher wages. Even in non-union shops, employers are finding that they have to raise wages in order to attract workers. This is what economists call a “strong labor market.” 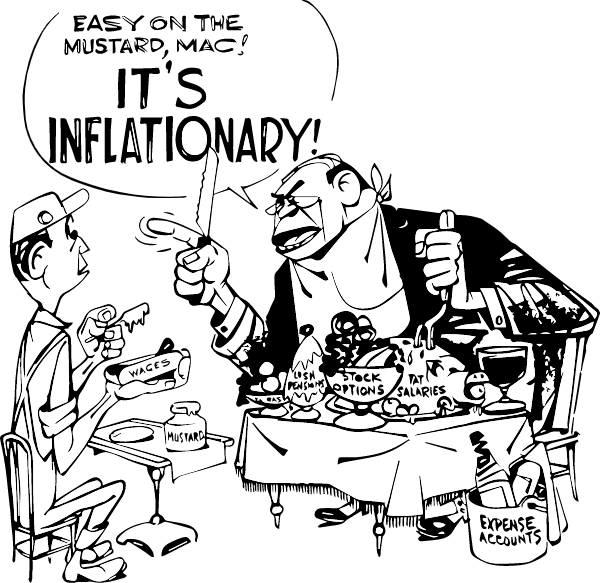 Wall Street, corporate politicians, and the economists who do their bidding want to convince us that it’s the strong labor market, or people having “too much money” from the relief funds provided by the federal government during the pandemic, that is causing inflation. Economists call this a “wage-price spiral” and it’s an argument that makes intuitive sense. In fact, it has been true, to some degree, at other times in history. And it’s an argument that is, needless to say, very convenient for bosses who want to avoid raising wages, or politicians who want to avoid spending money meeting people’s needs.

The “wage-price spiral” theory is based on the idea that demand drives inflation — but people aren’t suddenly buying vastly more food and gas. The problems we are facing right now are on the supply side.

Pandemic-related shutdowns reduced the ability of the global economy to produce and deliver goods throughout most of 2020. The low inventories demanded by “just-in-time” production methods and the long supply chains created by decades of globalization made it more difficult to restart production efficiently. Essentially, manufacturers are facing the consequences of their decades of “streamlining” and “rightsizing” and “offshoring” (in other words, speedup and laying off workers). Unfortunately, in our economic system, working people are the ones who are paying the price.

To take a specific example, the demand for semiconductors — which are essential for the production of everything from cars to home goods — plummeted during the lockdowns of 2020. With no one buying their products, semiconductor factories in China laid off workers and shut down. When demand picked up again in 2021, those factories had no stockpiles of semiconductors to sell. They had to hire new workers, purchase raw materials, and restart production. This raised the price of semiconductors and caused problems for all the industries which rely on them — which accounts for almost 40 percent of all manufacturing.

Supply problems are being further exacerbated as many industries — especially those dominated by large corporate monopolies — have used inflation as an excuse to raise prices beyond what is “necessary” and fatten their profits.

The war in Ukraine has also contributed significantly to inflation.

The spike in gas prices over the summer was driven by a combination of the war and oil company greed. The sanctions that the U.S. and Europe have placed on Russia are leading to more demand for oil that comes from someplace other than Russia. Oil companies, however, also seized the war in Ukraine as an opportunity to raise their prices, and they’ve seen record profits as a result.

The war in Ukraine has also driven up the cost of food. Ukraine, which is sometimes referred to as “the breadbasket of Europe,” produces huge quantities of basic grains and cooking oils. The war has meant that there are less of these goods on worldwide markets. While the U.S. is not seeing the same shortages as other parts of the world that usually receive Ukrainian food exports, we are still feeling the pressure on the prices of our food as wealthier countries compete for our supply. Ukraine also supplies more than a quarter of the world’s fertilizer exports.

Extreme weather events made worse by climate change are also starting to impact food prices. A heat wave in India, which is the world’s second largest wheat producer, greatly reduced their production. Rice production in China is likely going to be reduced because of a heat wave there. Ongoing drought in California is starting to impact tomato production.

Like the oil companies, large food corporations have been taking advantage of the situation to raise their prices and raking in record profits.

Raising Interest Rates to “Get Wages Down”

The theory that justifies interest-rate hikes as an inflation-fighting tool is that by “cooling” the economy, they will reduce overall, or “aggregate,” demand for goods and services. But, as economists Isabella Weber and Mark Paul pointed out in a recent op-ed, “The current inflation situation hasn’t been about all goods in the economy getting more expensive at the same rate. Specific goods — food, fuel, cars and housing — have been experiencing massive price shocks, raising the general inflation level substantially. Controlling these changes would require aggregate demand to shrink to unbearable levels for average Americans — essentially making people too poor to buy goods.”

Higher interest rates will not address any of the causes of our current inflation. They will not make semiconductors magically appear, Chevron and Exxon refund their profits to consumers, or undo the damage that Putin’s forces have done in Ukraine. What they are likely to do is to push the country into a recession, potentially throwing millions out of work.

While this might seem reckless, it is almost certainly intentional. Employers don’t like a strong labor market in which workers have leverage, and they are willing to wreck the entire economy in order to regain the upper hand. In fact, the chairman of the Federal Reserve Board admitted in a press conference on May 4 that his goal in raising interest rates is to “get wages down.”

In his op-ed, UE President Rosen lays out a variety of approaches the government could take to solving the cost-of-living crisis working people are facing:

“Rather than throwing our country into a recession with interest rate hikes, our federal government should take other measures to alleviate the pain being felt by working people, especially those on fixed incomes. Increasing Social Security payments, reinstituting child tax credit payments and providing inflation rebates to working people, which can all be paid for by taxing corporate profits and the rich, would put more money in working people’s pockets, allowing them to cope with higher prices.

“Our government can also take steps to directly control prices, such as those contained in the Emergency Price Stabilization Act introduced by U.S. Rep. Jamaal Bowman, D-N.Y., in August. This legislation would allow the government to investigate corporate profiteering and issue appropriate controls and regulations to stabilize prices. It would also engage and mobilize the public in a manner modeled on the successful and popular Office of Price Administration that kept basic goods affordable during World War II.

“Furthermore, Congress should strengthen workers’ ability to negotiate higher wages by immediately passing the Protecting the Right to Organize, or PRO, Act, which would make it easier for workers to form unions, and by fully funding the National Labor Relations Board to make sure it has the resources to enforce the existing labor law.”

As Rosen concludes, “Our government has the tools to address the cost-of-living crisis. It just needs to use the right ones.”