The Seven Tests of Just Cause 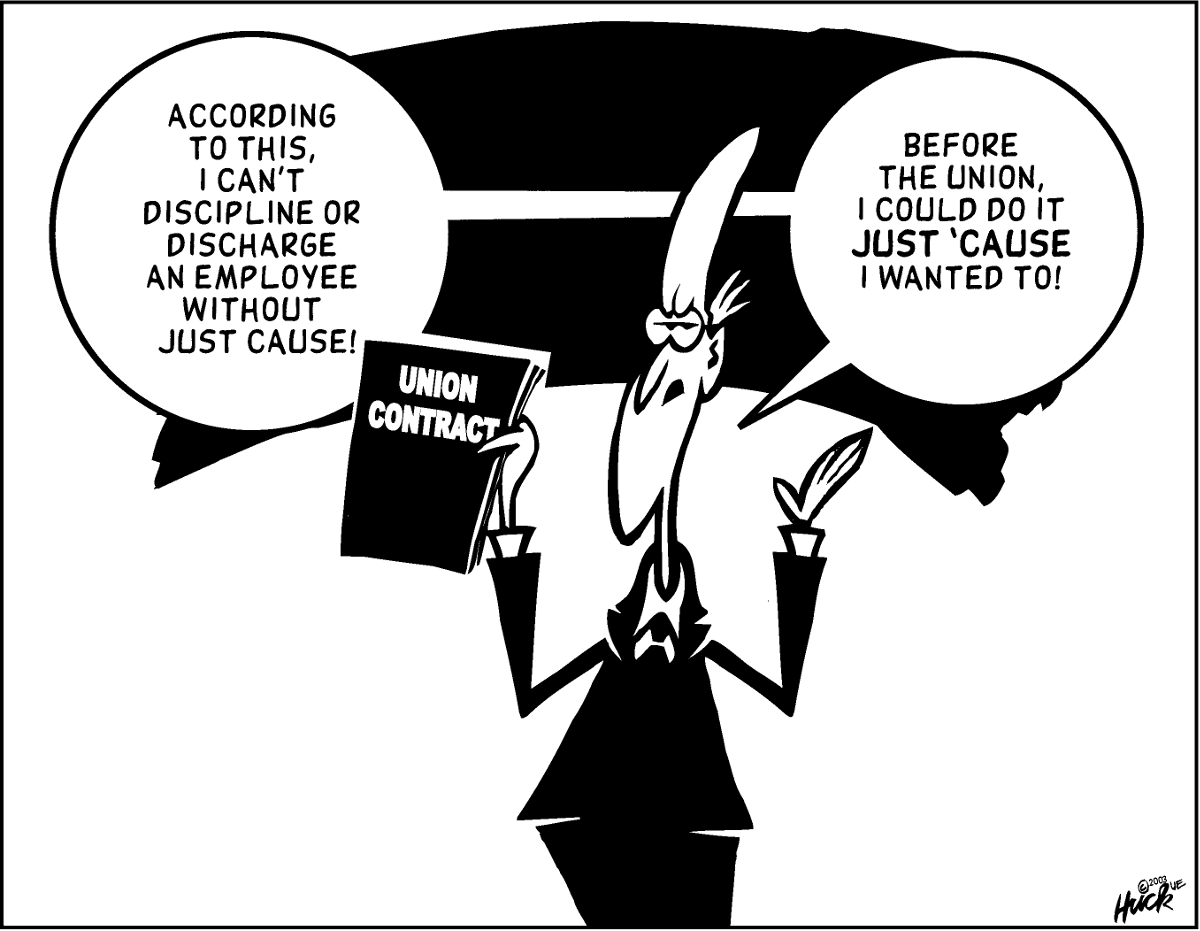 One of the main reasons workers join unions is to gain protection against unfair and unjust discipline that employers hand out. Stewards must be ready to handle all sorts of discipline cases, from warnings to suspensions to firings. Stewards must be ready to deal with situations ranging from gross discrimination by the boss on who gets disciplined to union members who sometimes seem to go out of their way to get themselves in trouble.

Our main contractual weapon is often summed up in one short sentence, “Employees shall be disciplined or discharged only for just cause.” In some contracts the words used are “proper cause” or “fair cause.” The importance of a sentence like this is that it binds the employer to imposing discipline not just for any reason (cause) but the reason has to be a “just” reason. Many arbitrators have gone so far as to hold all employers to a “just cause” standard, whether the contract uses the words or not.

What is a “just cause” standard? In 1964, labor arbitrator Carroll Daugherty introduced “The seven tests of just cause” in the form of seven questions.

Union attorney and educator Robert M. Schwartz, author of “The Legal Rights of Union Stewards” and other publications, has updated Daugherty’s seven tests to better reflect the way arbitrators decide cases. In preparation for “Just Cause: A Union Guide to Winning Disciplinary Cases,” Schwartz reviewed some 15,000 disciplinary awards which revealed wide agreement on the following basic principles:

An employer may not discipline an employee for violating a rule or standard whose nature and penalties have not been made known.

Example: An employer cannot discipline an employee for taking a call at work on his/her cell phone, if the employer never notified the employees that this was not permitted. However, this doesn’t apply to self-evident misconduct. Examples include theft, insubordination, fighting, sleeping on the job. Employers can publicize rules a number of ways: distribution, bulletin boards, e-mail, meetings or classes. The rules must be clear and should not be ambiguous or vague, such as do not engage in “boisterous conduct” or do not exercise “poor judgment.”

An employee may not be penalized for violating a rule or standard that the employer has failed to enforce for a prolonged period.

Example: An employer cannot discipline an employee for coming into work a few minutes late one day, if the employer hadn’t enforced this rule for a long time and was aware of other employees coming into work late. A union must prove that employees ignored the rule without penalty over a prolonged period of time and that management was aware, or should have been aware of, the infractions. An employer who has not enforced a rule in the past can “reset” its policy so long as it notifies employees that it will punish all offenders in the future.

An employer must conduct an interview or a hearing before issuing discipline, and must take action promptly. Once assessed, discipline may not be increased.

Example: An employer cannot summarily fire an employee for allegedly stealing some items from his/her work area that turned up missing during an end of the month inventory. Employers must provide an employee with notice of the charges against him/her and an opportunity to explain before discipline is imposed. However, the employer may be excused from conducting an interview if the evidence is so conclusive and misconduct is so egregious that nothing the employee could say could possibly affect the outcome. Employers must take disciplinary action in a timely manner. Employees must be given precise statements of charges. Employees cannot be disciplined twice for the same misconduct (i.e. an employee cannot be given a warning and a suspension nor can the penalty be later increased in most cases once the penalty has been imposed).

Charges must be proven by substantial and credible evidence.

Example: An employer cannot discipline an employee based on a rumor. The employer has the burden of proof regarding the alleged misconduct and the appropriate penalty. Arbitrators use three standards of proof: “beyond a reasonable doubt,” which requires an employer to prove guilt “to a moral certainty;” “clear and convincing,” requires evidence that is corroborated, consistent, and precise; “preponderance of the evidence,” is satisfied if the evidence “more likely than not” proves the employer’s case.

Unless a valid distinction justifies a higher penalty, an employer may not assess a considerably stronger punishment against one employee than it assessed against another known to have committed the same or a substantially similar offense.

When responding to misconduct that is short of egregious (very serious), an employer must issue at least one level of discipline that allows the employee an opportunity to improve.

Example: An employer is expected to apply the lowest penalty that is likely to prevent a recurrence of the misconduct (i.e. giving the worker a warning before a suspension), unless the misconduct is egregious, such as theft, violence or threats of violence, or sabotage. The usual steps in progressive discipline are verbal warning, one or more written warnings, one or perhaps two suspensions, and discharge.

Discipline must be proportional to the gravity of the offense, taking into account any mitigating, extenuating, or aggravating circumstances.

Just Cause: A Union Guide To Winning Disciplinary Cases by Robert M. Schwartz is the first new look at union discipline principles since “the seven tests of just cause” propounded by labor arbitrator Carroll Daugherty in 1964. Purchase your copy at the Labor Notes store for $20/each.

Here are some basic tips for stewards handling discipline and discharge cases:

☞ Use the "seven tests" as an outline. Did the employer meet the seven tests? Remember that just because an employer messes up on one of the seven tests, this doesn't mean we automatically win. However, proving a violation of one or more of the tests solidifies our chances of winning if the case advances to arbitration.

☞ If you are there in the employer’s disciplinary meeting, try to stop the employer from suspending or firing a worker. Try to get a cooling off period if necessary. The case becomes harder once a worker is out the door: now we not only have to fight about what happened but also over back pay, etc.

☞ Ask for the employer's notes and records used to make a decision, including any notes or records a foreman or supervisor keeps, even informal records. The union has a right to them.

☞ Do a thorough investigation of the case. DON'T take the employer's word on anything.

☞ In a grievance meeting, make the employer prove their case first. Make them present all the facts and don't assume anything. Don't let the boss start the meeting by saying to the union, "OK, tell me why I shouldn't fire Joe." Make the boss justify firing Joe.

☞ There are two parts to every discipline case. Did the employee violate a known rule, and what should the punishment be? Sometimes we lose the first part but then we have to make sure the punishment fits the offense.

☞ If the employer refuses to back down from a written warning, and the case doesn't merit arbitration, send the employer a written statement disputing the facts and the discipline. Ask that this letter be put into the employee's personnel file.