Running Out of Time: Missing the Time Limit to File a Grievance 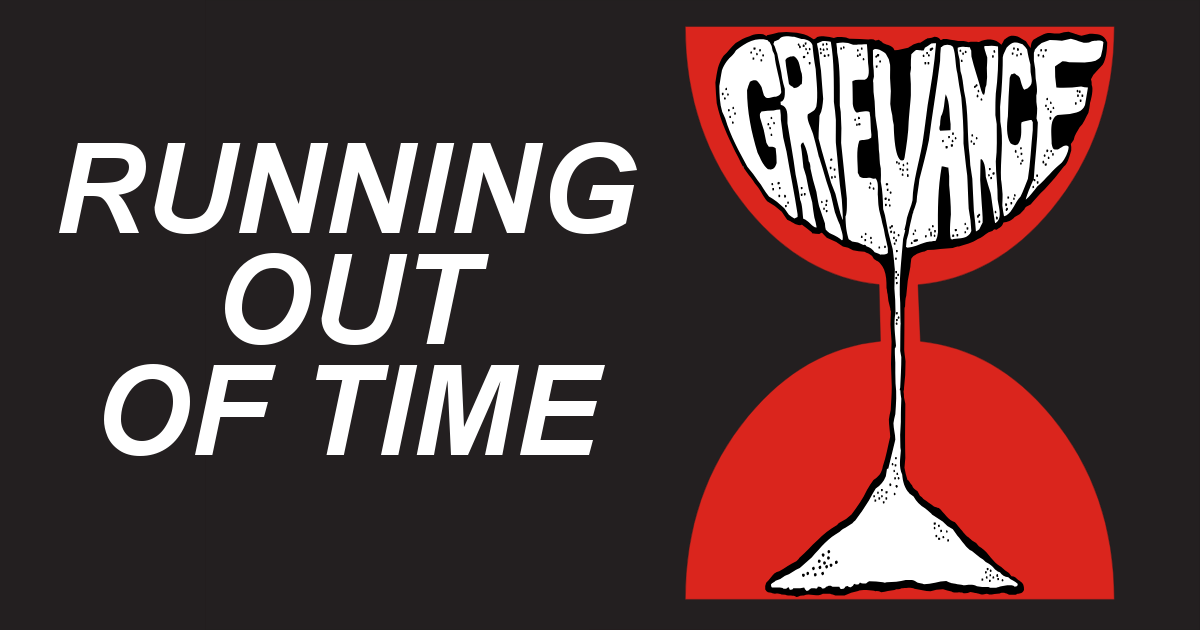 Louie Lang comes up to his steward and says, “Jose, I was just going over my pay stubs and realized that I didn’t get paid for my overtime.”

“Is this last week's pay you were short on?” asks Jose.

“No, it was from about three weeks ago.  I know the contract says we’re supposed to file a grievance within 5 days, but I didn’t check my pay back then. Can I still file a grievance?”

Hester Prim says to her steward, “It’s not right that Michelle was awarded the job for claims adjuster. She has less time than I do.”

Beatrice asks, “Did you bid on the job? I don’t remember seeing your name.”

“Yes, I did, but when they awarded the job to her I told them that I didn’t want the job, but now I’ve changed my mind. I want to file a grievance.”

Beatrice says, "I’ll look into it but it's been over a month since the job was awarded.”

Peter Procrastinator, the second shift steward, runs up to the Chief Steward during shift change. “You know that grievance about job rates that was going into second step? Well I have been real busy with my kids and I forgot to put it in.”

“When was it supposed to be put in?”

“Yesterday. Think the company will refuse to take it?  People will be real mad at the union if we lose this one.”

When does a first step grievance have to be filed?

The UNION refers to a steward or officer of the union, that is, someone who is more familiar with the contract than most employees. So in many cases, the clock doesn’t start ticking until it can be shown that the UNION was aware of the problem.

Does that mean that Hester Prim has a good case, even though a month has gone by since the job bid was awarded?  Not necessarily. A lot will depend on how, if ever, similar cases have been handled in the past.  In this case it was very clear that she was not awarded the job bid, even though she was the senior bidder. The employer didn’t sneak something by her, they did it out in the open. There are two other things going against her.  She told the employer that she didn’t want the job. This is just about the same as saying, “I don’t want to file a grievance.”

The other point against her is the amount of time that has gone by. If she decided to change her mind within a day or so of not being awarded the job it would be a different matter.  In this case, unless there is lots of past practice in similar cases, time has worked against Hester Prim and she doesn’t have a good grievance.

What about Louie Lang - three weeks have gone by since he was shorted in his pay check. Does time work against him also?

This situation is different for several reasons.  Louie was ready to file a grievance as soon as he knew the problem existed. Of course some smart-mouth boss might say that Louie should check his pay check immediately upon receiving it, which in most cases is true, BUT this shouldn’t be grounds for dismissing this grievance.  Louie is easily within the five day limit for filing a grievance once he became aware of the problem.

The second reason Louie will win is that this grievance involves regular pay and there are different rules governing wages.  Unless the employer has an argument that Louie didn’t work the overtime, they must pay him for time worked. This is covered not only by the union contract but by State laws.

In this situation Peter had better file the grievance right away. Much will depend on the past practice that exists about extending deadlines for submitting grievances to the next step. If the past practice that exists is that the employer “agrees” to extend the deadline, then Peter may be in trouble because there was no agreement to extend the deadline on this grievance.  Even if the practice about missing deadlines is very loose and not followed by either the employer or the Union, Peter could be in trouble if the employer decides to refuse the grievance. Arbitrators can be very funny about this issue. They don’t see why the union can’t follow the deadlines that exist in the contract.

If this is an important grievance that the members care about, then Peter’s best defense will be for the boss to know there will be problems with the members if the employer decides to play “technical games” with the union and refuse the grievance. Of course the members better be ready to follow-up with some action.

The real solution to this problem is to not miss the deadlines for filing grievances.

When Jack Bellemy, the first shift steward was called to the office he asked what was going on. The Supervisor said, “all I can tell you is that John Barleycorn was caught again being drunk at work.” Jack groaned to himself, “not again.” When he got to the office, the Personal Manager was firm, “John is fired. You know his record. He’s got the worst absentee record in the company, he’s been caught and sent home for being drunk on two other occasions in the last year and he won’t go anywhere for help. He’s fired.”

Jack used all the familiar arguments.  John was usually a good worker. He had 20 years of service and was having problems at home. He was too proud to go for help.  After an hour of discussion the boss gave his final offer. We’ll give John one last chance. He has to go for help, he’s suspended for a week and he must clean-up his absentee record. Any screw-ups and he’s fired and he has to agree that if he’s fired he can’t file any more grievances. This is it. His last chance.”

Most UE Stewards will come across this situation in their careers as union stewards or officers. The question is, should stewards use last chance agreements and how often should they be used.

Stewards should start by remembering that discipline and especially discharges are only valid if there is “just cause.” Very briefly, this means the employer must have followed all the proper procedures, proved that the employee violated a rule, given punishment that is not greater than the wrong-doing, and treated all workers the same. The employer must have a valid reason for disciplining a worker and the punishment must be just and proper.

The fact is that sometimes the Steward runs out of arguments and an employee like John Barleycorn runs out of chances. It is a fact that alcoholism is a disease and should be treated as a disease. It is considered as such under the Americans with Disabilities Act, but with the key point being that a worker must admit they have a problem and must be willing to seek help. If a worker refuses to seek help for alcoholism then it is harder for them to claim protection under the ADA.  Most arbitrators will agree that workers suffering from alcoholism deserve several chances to get well, but at some point they will draw the line and say enough is enough.  In the case of John Barleycorn, the steward may have no other choice but to make a “last chance agreement” and hope for the best.