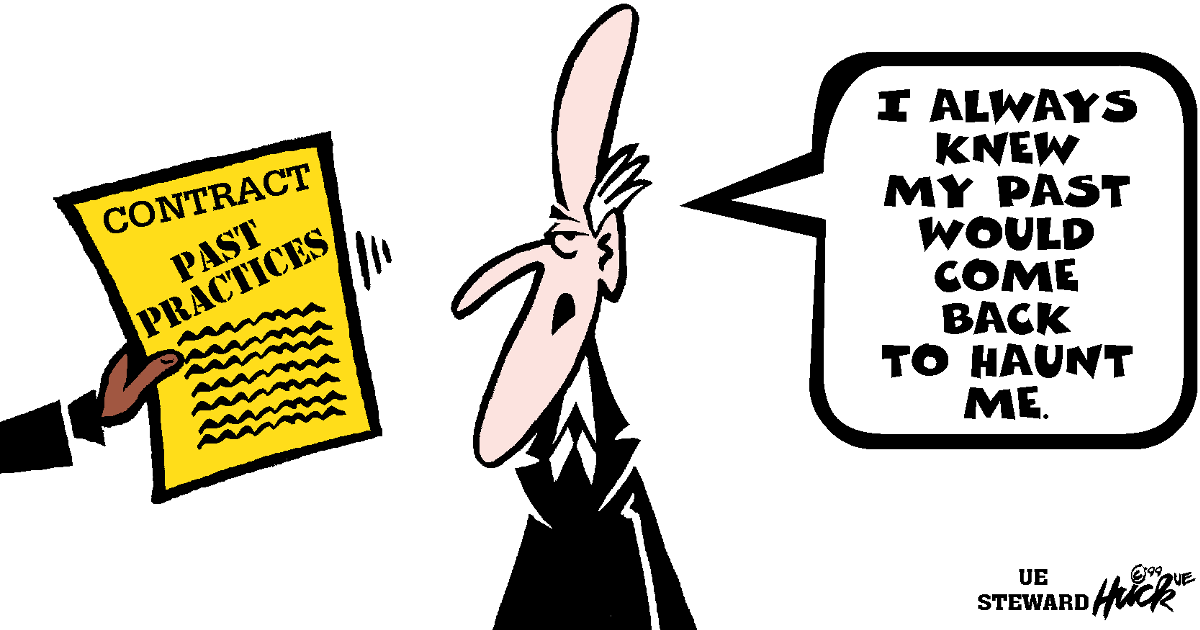 Definition of a past practice

Be sure to check your contract for any language that may limit the use of past practices for grievances.

Mobilize the members! Don’t depend on any arbitrator or NLRB agent to save the day. Everything cited above are “guidelines” that most arbitrators follow BUT they are under no obligation to do so. Rely on the membership to win past practice grievances, just like all grievances.

The test for a valid past practice is as follows:

It must exist for a reasonably long time.

It must occur repeatedly.

To be valid, a practice has to occur many times, the more times the better. It should also occur consistently. A practice that happened five times four years ago and hasn't happened again is not a very strong past practice. An exception to this might be a practice that occurs around a specific holiday. If every year for seven years management has allowed workers to go home after working only half the day on the day before Christmas without penalizing them, this could be a valid past practice.

It must be clear and consistent.

Example: Management has always let workers accept personal phone calls. The union can document over 100 times in the last five years. Management says they can prove that on three occasions workers were refused the right to accept a personal phone call. In this case the clear and overwhelming pattern is in favor of the union. Three refusals over five years doesn’t break up the clear and consistent pattern.

It must be known to both management and the union.

While a past practice does not have to have been “negotiated,” it must be something that both parties know about. On the management side it is not always good enough for a low-level foreman to know; it must be higher management.

Example: For years workers have been leaving the workplace early on Fridays and the foreman knows it. According to the "absentee program" workers should receive one point for leaving early, but the foreman never gives points for Friday. Upper management finds out and decides to give everybody warnings for leaving work early. The union could argue that nobody should get a warning because management did not inform the union that they wanted to change the practice of no discipline for leaving work early on Friday. However, since upper management did not know about this practice, it would be hard to argue that workers could continue to leave work early every Friday without discipline.

It must be accepted by both management and the union.

Example: For many years workers have been allowed to line up at the time clock after the first bell rings, signifying there are five minutes left until quitting time. A new boss says that no one can line up until the quitting bell rings. The union has a strong case of past practice. Management cannot claim they didn’t know workers were lining up after the first bell. In this case since management never did anything to stop this practice, this indicates acceptance of the practice.

Types of Past Practices

These practices come into being when there is contract language that is vague or general. The practice clarifies the meaning of the language.

Example: The contract language reads, “The company will allow union stewards reasonable time off from work to attend union meetings.” The general phrase is “reasonable.” For many years the company has allowed stewards to attend monthly union meetings and the Regional council meeting two times a year. Every other year one steward and the officers get time off to attend the National Union convention. This past practice now clarifies what the contract means by “reasonable.”

This is the strongest type of past practice because it is backing up negotiated language. In most cases an employer must bargain to change the past practice, and they cannot change it if the union doesn’t agree.

This is a practice that is not addressed by any contract language. Most often these are “benefits” that workers take for granted and so were not included in the contract.

Example: There have always been vending machines in the cafeteria. Management cannot just decide to remove them.

Independent past practices can be terminated by management for the following reasons:

Even under the “change in conditions” and “abuse” situations the employer must bargain with the union before ending the practice.

Most arbitrators will not extend these past practice rights to “work methods.”

Example: Management wants workers to run three machines instead of two, claiming new technology makes them easier to run. The union probably cannot claim it is a past practice that workers only run two machines. However in most cases the union can demand that management bargain over a change in working conditions.

Example: The employer has never given Union Representatives “points” under the absentee system for attending union conventions, even though there are no provisions for this exclusion in the absentee system which is part of the contract. This has been going on for ten years. Each time, the union notifies management as to who will be attending the convention. In this case although the practice conflicts with the contract, it probably would be considered a valid past practice.

The UE Steward wishes to thank Bob Schwartz for his useful book, How to Win Past Practice Grievances. It can be ordered for $13 plus shipping from Labor Notes, labornotes.org/store.