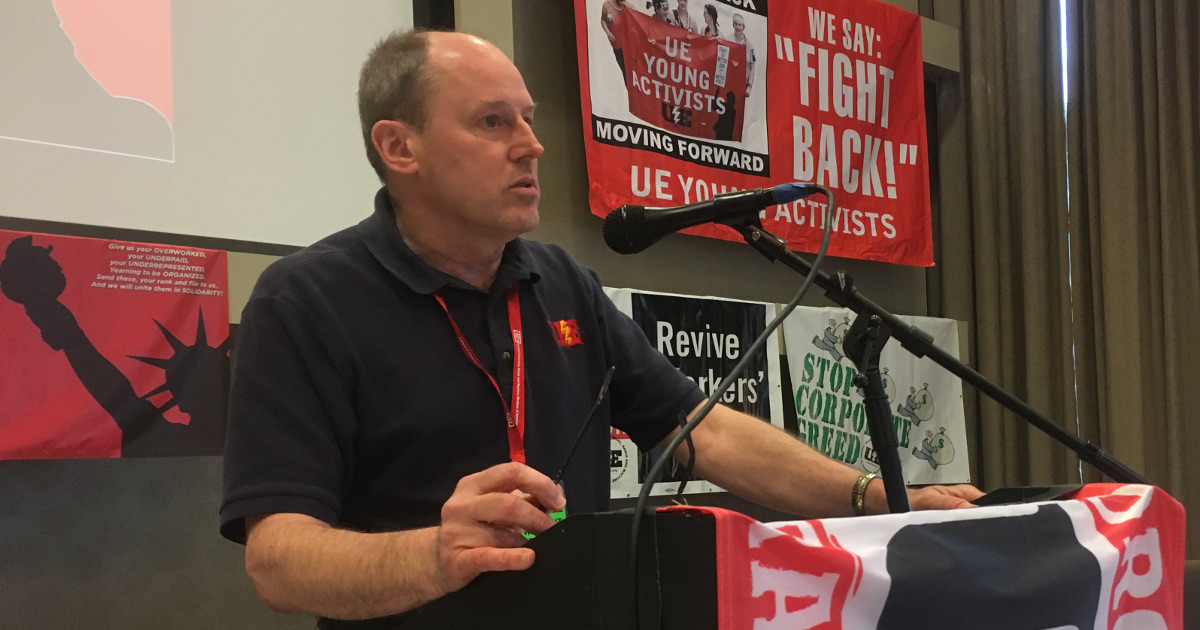 Delegates to UE’s 76th Convention, meeting in Pittsburgh, elected Western Region President Carl Rosen to be the next General President of the union. UE’s current General President, Peter Knowlton, will retire when his current term concludes at the end of October.

Rosen has been a member of UE since 1984 when he joined UE Local 190 in Chicago upon being hired at Kerr Glass. He worked at Kerr for 10 years as a maintenance electrician and served in various positions for the local including steward, publicity and education director, chief steward, bargaining committee member and president. During that time Rosen was elected to the UE District 11 executive board and then, in 1990, to the position of secretary-treasurer, at which point he began serving on the UE General Executive Board.

As a shop leader and as district and regional president, Rosen has serviced locals, participated in numerous contract negotiations, settled and sometimes pursued arbitration cases, supported strikes and other job actions, and provided assistance to organizing campaigns and first-contract fights.

In 2009, Rosen led the bargaining with Bank of America during the Republic Windows and Doors plant occupation. The settlement he helped Local 1110 negotiate with Republic and Bank of America totaled $1.75 million and provided the workers with the eight weeks of pay they were owed under the federal WARN Act (which Republic indicated it had no intention of paying), two months of continued health coverage, and pay for all accrued and unused vacation.

In recent years Rosen has put particular emphasis on providing rank-and-file education programs in the Western Region. He has been part of UE’s pathmaking international work, and has represented UE on local or national boards of many UE coalition partners including Jobs with Justice, US Labor Against the War, the Labor Party, and Our Revolution.

In his acceptance speech, Rosen told convention delegates, “We are a union that practices rank and file democracy, unity against the boss, solidarity with our allies, internationalism, and aggressive struggle. We know which side we are on!”