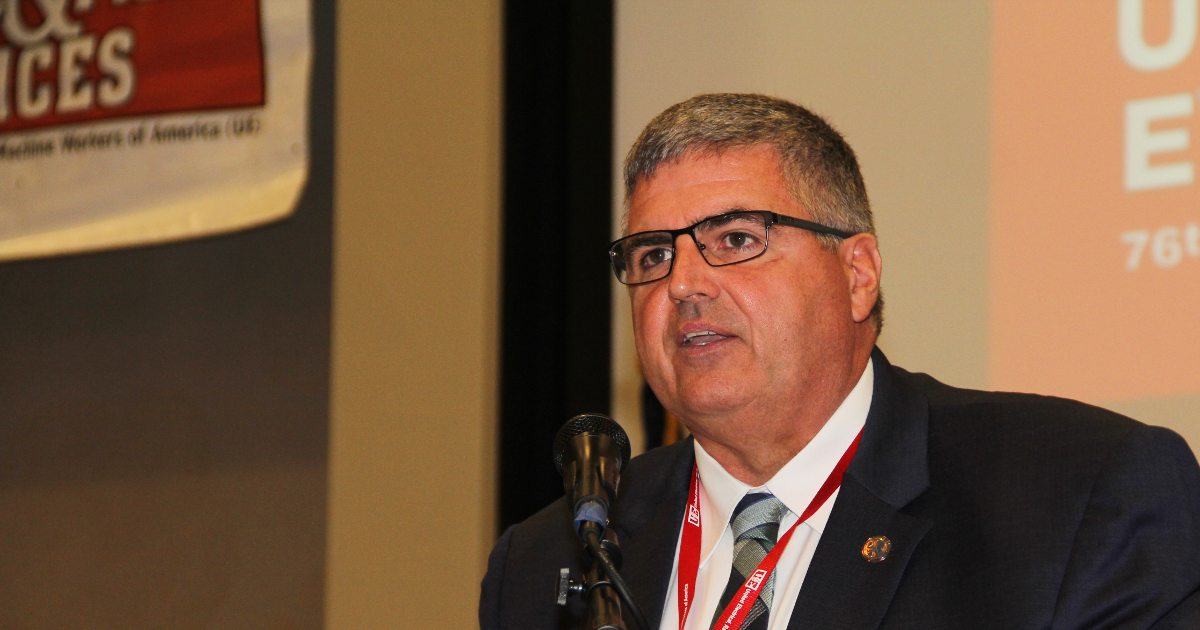 UE’s 76th Convention was joined by more guests from other unions than any other UE convention in recently memory. Leaders and young activists from the other U.S. and Canadian unions that make up the North American Solidarity Project — Unifor, the Utility Workers Union of America, National Nurses United and the International Longshore and Warehouse Union — joined the convention in various capacities, as did Chris Townsend of the Amalgamated Transit Union.

Jim Slevin, the newly-elected president of the Utility Workers, addressed the convention on Monday morning, telling delegates that “our two unions share core values,” going back to UE and UWUA’s shared origins in the Congress of Industrial Organizations in the 1930s.

“We are proud to stand together with the UE and other organizations in the North American Solidarity Project,” said Slevin. “This alliance facilitates vital, important conversations between us and our brothers and sisters,” about how to fight for Medicare for All and “renew the sleeping labor movement that needs to wake up today.”

The International Longshore and Warehouse Union, a progressive rank-and-file union which, like UE, was subjected to vicious red-baiting in the 1940s and 50s, sent a delegation from several locals and their affiliate the Inland Boatman’s Union.

Convention guests reported positively on their experiences at the UE convention.

“The ILWU has more in common with UE than any other union in the country,” said Zack Pattin, a young activist from ILWU Local 23 in Tacoma, WA. “We got a shared history going back eighty years and went through a hell of lot together, got a lot in common with one another. One young UE member asked if it felt intimidating being at another union’s convention. I told her not UE. I’ve never felt so at home around folks I’d just met.”

“I was proud to represent UWUA members as a guest observer at UE’s 76th National Convention,” UWUA President Slevin told the UE NEWS. “It was an honor to see first-hand rank-and-file leaders coming together to set UE’s policies and direction for the future. We in the Utility Workers look forward to standing shoulder to shoulder with UE and UE members for many years to come.”