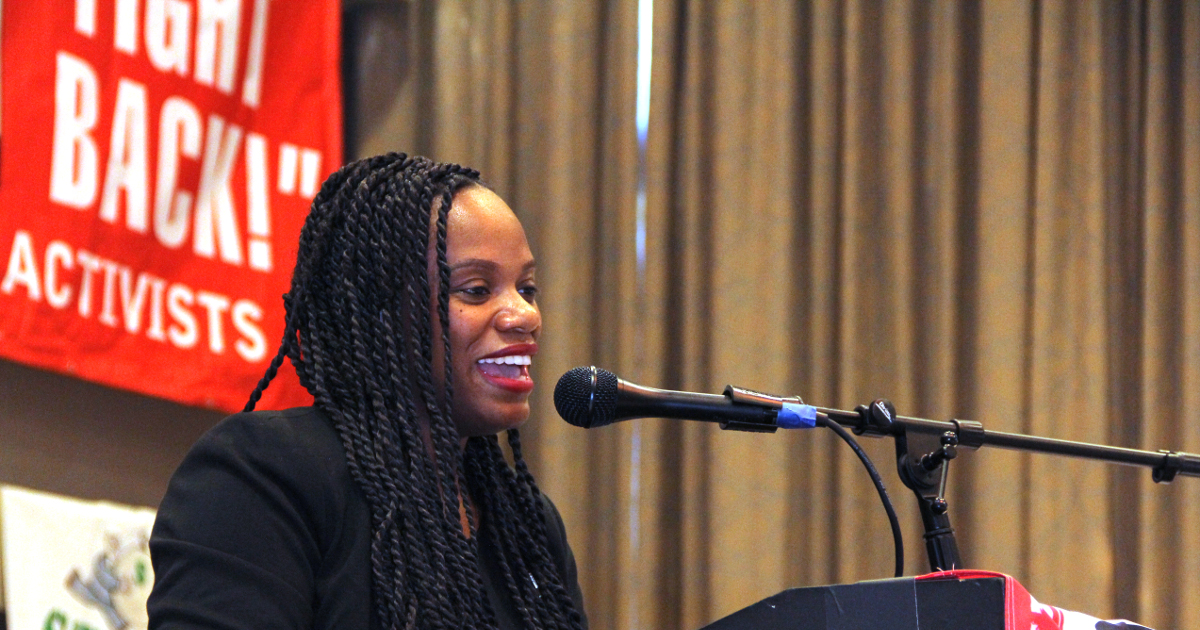 The first guest speaker on Sunday morning of UE's 2019 convention was State Representative Summer Lee, who represents a working-class district southeast of Pittsburgh. She was introduced by Local 610 President Antwon Gibson, who told his fellow delegates that Lee was “leading the next wave of folks that are standing up to fight injustice.” During the nine-day strike against Wabtec last winter, Lee “was there at our rallies, fighting right there with us.” Gibson noted how rare it is for a politician to do that.

Lee began her remarks by saying “when UE calls, I’m going to show up, every single time, because UE shows up for me.” (UE was the only union that endorsed her when she ran for office, against a powerful establishment Democrat.)

Before she ran for office, Lee told delegates, “I didn’t even realize what revolution looked like and what my part in a revolution could even be.” Her community, she said, “had issues on top of issues,” issues which predated the current administration. “We’re in the North but we’ve got one of the most segregated and one of the most racist cities in the country. We also have one of the unhealthiest cities in the country, with the most air pollution.”

“Instead of continuing to fight power, we decided that it was time to take some power.” Lee asked how many people in the room were represented in government by “somebody who has lived the experiences that you have lived, who walked through life the way you’ve walked through life. How many people represent you who live on your side of the tracks?” Referencing Gibson’s opening remarks, Lee asked “Why are we still voting for … politicians who aren’t going to stand with you on a picket line?”

Lee decided to run against a 20-year incumbent whose “whole entire family was in office” because “my community could not afford to wait any longer for someone to come and help us.”

She emphasized that “we need to win and fight for every single seat.” She introduced her fellow state representative Sara Innamorato, Allegheny County Councillors Anita Prizio, Bethany Hallam and Liv Bennett, and Pittsburgh City Councillor Deb Gross — all of whom have “taken power” from the local Democratic Party machine.

Lee urged all union members to get involved in the political process. “With the Republican Party decimating union rights, how many of you all can afford to be on the sidelines?”

“I’m here to tell you that the victories that we have had in the past are nothing compared to the society that we are ready to make right now. There is so much more in the future.”