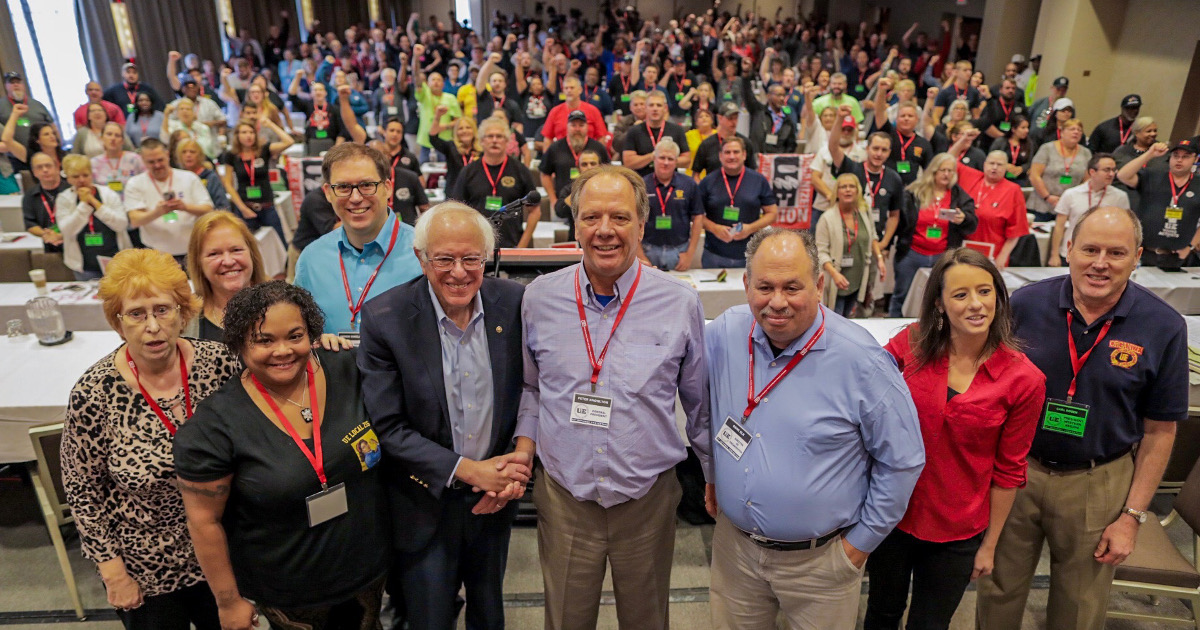 The endorsement was the final resolve of the resolution “Independent Rank-and-File Political Action,” which cited Sanders’ long history of supporting UE locals in struggle. The resolution also denounced the political attacks faced by working people at the federal and state levels, led by Republicans but all too often assisted by the Democratic Party establishment. However, the resolution noted that a new wave of unabashedly pro-worker, anti-corporate candidates, the Fight for $15 campaign, the recent wave of teachers’ strikes, and other pushbacks against economic inequality have combined to put pressure on Democratic politicians to stand up for working people.

Local 506 President Scott Slawson spoke about Sanders’ support for the nine-day strike that Locals 506 and 618 waged against Wabtec’s concessionary demands last winter. “We took a phone call [from Sanders] at 2:30 in the morning at the bargaining table, he was with us all hours of the day,” Slawson reported. He pointed out that Sanders was one of only three politicians, along with Pennsylvania Governor Tom Wolf and State Representative Pat Harkins, who stood with UE members during their strike and contract negotiations and called on a regular basis.

Armando Robles, Local 1110, cited Trump’s separation of immigrant families as one of many reasons why it is important to replace Trump with Sanders.

Western Region President Carl Rosen drew delegates’ attention to the paragraph of the resolution which encourages UE locals to use the Sanders campaign infrastructure to support workplace struggles, as it had with the Wabtec strike. He said he had recently received a call from a Sanders campaign staffer who said “We want to know about the fights that are going on in your shops, in your workplaces, because we want to help with them.”

“They really want to engage working people in struggle and in the campaign,” Rosen continued, pointing out that “if and when Bernie gets elected, this country doesn't change by itself overnight,” and that enacting positive change for working people will require ongoing mobilization.

Delegates also spoke to the importance of political involvement more generally, both participating in elections and building social movements and organizations like Our Revolution, Fight for $15, Black Lives Matter and the Poor People’s Campaign. Kathleen Coonrod, Local 203, pointed out that her local is still fighting for a $15 minimum wage in their contract, and so the Fight for $15 movement “is directly affecting UE members.”

Local 893 President Becky Dawes reported that UE’s public-sector locals in Iowa are “living the consequences” of election results. As a result of Republican domination of Iowa’s state government since 2017, public-sector workers in Iowa are now working under “the most vicious anti-union legislation that has been put forth so far,” which has resulted in the destruction of their collective bargaining agreements. “We know that we need to change the face of the legislature,” Dawes said, in order to win improvements for UE members.

“We are going to grow the trade union movement”

At the end of the Monday morning session, Sanders addressed the convention (a video recording of Sanders’ complete remarks is available here). “If there was ever a time in the history of this country when the working class of America had to stand up and tell the corporate elite that this country belongs to all of us and not just the one percent, this is that time,” Sanders began. “What the UE is about, what our campaign about, is saying that in the wealthiest country in the history of the world we can have a nation where all of our people live with security and dignity.”

Sanders received a standing ovation when he said that his role as President will be “to stand with the working class of this country and to end the 45-year-old corporate war against working people.” He continued, “If there is going to be class struggle in the United States, it's time that the working class got on the offensive and won that struggle.”

Sanders congratulated Locals 506 and 618 for their “historic and successful” strike. “Your victory is not only a win for the workers at Wabtec, but for workers all across this country who are sick and tired of seeing their standard of living decline.”

“The trade union movement today is the last line of defense against the greed of the billionaire class, and that is why we are going to grow the trade union movement,” Sanders said. He discussed his Workplace Democracy Plan, which he had unveiled the previous week. A centerpiece of the plan is “card check,” or allowing workers to organize their workplace by signing a majority of their co-workers up on cards, without having to go through the lengthy National Labor Relations Board election process which allows bosses to terrorize workers with union-busting campaigns.

The Workplace Democracy Plan will also impose strong penalties on companies that violate workers’ rights, do away with “right to work” legislation, guarantee every worker the right to strike and ban the replacement of striking workers “once and for all.” Sanders received particularly enthusiastic applause when he said, “Under our plan, we will never allow a company like Wabtec to abrogate an existing union contract during a merger or a hostile takeover. We will require companies that merge to honor union contracts.”

Sanders condemned the “grotesque level of income and wealth inequality” in our country, where “the top one percent of American society now owns more wealth than the bottom 92 percent,” and outlined a comprehensive program to address it as president.

“Healthcare is a human right, not a privilege,” he declared, and “we will join the rest of the industrialized world” by guaranteeing the right to healthcare through a Medicare for All, single-payer healthcare system — long a political priority for UE.

He also pledged that his administration will defend and expand pensions and retirement security for working people, ensure the right to education, raise the minimum wage, fix the broken criminal justice and immigration systems, defend women’s right to make choices about their own bodies, and create millions of good jobs while addressing the climate crisis.

He condemned President Trump’s racism and divisiveness, and emphasized that unity across differences of race, immigration status, gender and sexuality are crucial to winning justice for working people. “When we bring our people together around a progressive agenda that works for the working families of this country, nothing will stop us from securing victory.”

Sanders ended his remarks by emphasizing what Rosen had pointed out earlier — that enacting his pro-worker agenda will require ongoing mobilization of working people after the election. “After we are inaugurated,” he said, “I will need your help again, to help me stand up to the power of the corporate elite, help me grow the trade union movement, help me develop an unprecedented grassroots movement of millions of Americans who are prepared to stand up to the large corporations of this country and to say loudly and clearly that in this country, we will create a government and an economy based on the principles of justice — economic justice, social justice, racial justice, environmental justice.”

Sanders concluded, “Brothers and sisters, this is an unprecedented moment in American history. We are in a struggle for the future of this country. It is a fight that we cannot and will not lose.”

Following Sanders’ remarks, delegates enthusiastically repeated the endorsement vote – which had been suggested by Dan Leary, Local 222, earlier that morning so that Sanders could see rank-and-file democracy in action.

Sanders is only the sixth candidate to receive UE’s endorsement for President, and the only candidate UE has ever endorsed in a primary. “From four decades of actively supporting UE members and other workers in Vermont, to his vocal support for our 1700 members in Erie, PA who went on a nine-day strike this past winter, Bernie Sanders has always made it clear which side he is on,” said UE General President Peter Knowlton.